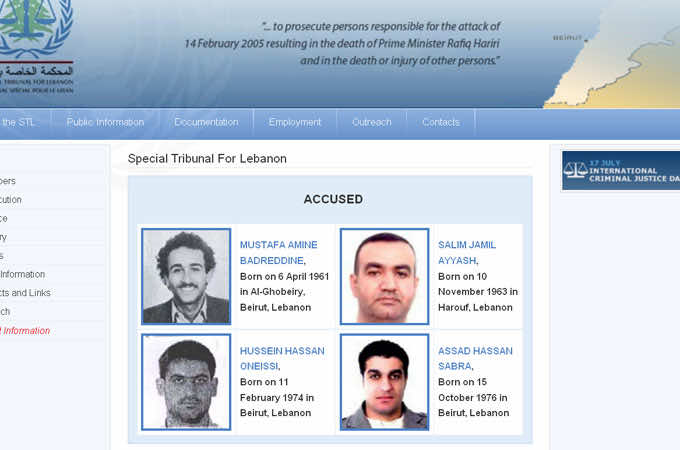 Trial could begin in absentia but prosecutor says Lebanon has not had enough time to arrest suspects over 2005 killing.

A special court investigating the 2005 assassination of Rafik Hariri, the former Lebanese prime minister, is discussing the possibility to begin trials of four defendants despite the fact that the men remain at large.

Friday’s hearing at the Special Tribunal for Lebanon (STL) in The Hague follows a statement by Daniel Bellemare, the prosecutor, that Lebanese authorities had not had enough time to arrest the men.

Prosecutors are expected to tell judges it is too early to hold a trial in absentia and that authorities should be given more time to arrest the suspects.

“It is premature to initiate a trial in absentia,” Bellemare wrote in a document published by the Netherlands-based STL on Tuesday.

All four men are linked to Hezbollah, an important pillar in the March 8 Alliance, a coalition of Shia Muslim, Druze and Christian parties that currently controls Lebanon’s government.

They are accused of carrying out the February 2005 roadside bombing that killed Hariri and 22 others as Hariri’s motorcade moved down a seafront road in the center of Beirut.

Hassan Nasrallah, the leader of Hezbollah, has dismissed the STL as a conspiracy between Israel and the US meant to sow sectarian strife and has vowed that no member of his movement will ever be found or arrested.

The Hezbollah-allied coalition’s control of government has also led to funding disputes with the tribunal, which has called on Lebanon to pay the 49 per cent share of the costs of running the court that was due at the end of October.

Marten Youssef, the STL spokesman, told the NOW Lebanon news site on Thursday that the presiding judges will rely on a monthly report from Lebanese authorities in deciding whether enough efforts have been made to arrest the men.

The STL, founded in 2009, is allowed to try defendants in absentia. Its pre-trial chamber was asked in October to determine whether such proceedings were appropriate. It asked both the prosecution and defence to submit arguments.

Lebanon’s previous government, led by Hariri’s son Saad, co-operated with the STL. But in January Hezbollah toppled that Western-backed coalition, largely over its support for the tribunal.