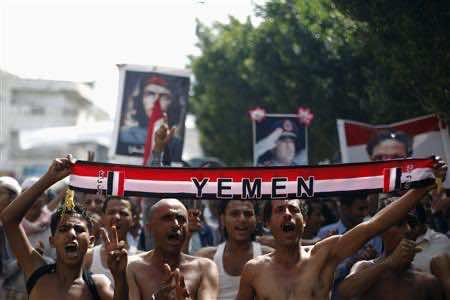 At least 13 people were killed in heavy fighting in the Yemeni city of Taiz on Friday, a day after a U.N. envoy began a new mission to push President Ali Abdullah Saleh to quit under a Gulf peace plan.

Witnesses and medical staff said at least 30 people were also injured in the fighting between Saleh’s Republican Guards and opposition tribesmen in Yemen’s third largest city, a hotbed of anti-Saleh protests some 200 km (120 miles) south of Sanaa.

An eight-year-old girl was killed and her mother was critically wounded in further shelling on al-Hasab neighborhood in the western part of the city, hospital officials said, raising to three the number of children killed in the clashes.

Three women also died in the shelling of the al-Rawda and Zaid al-Moshki districts as well as Freedom Square, where demonstrators demanding an end to Saleh’s 33-year rule gather for Muslim noon prayers every Friday.

Saleh’s forces later shelled the al-Rawda Hospital, where victims of earlier fighting had been taken, killing one patient and wounding five people. They said patients had to be rushed for safety into the basement after the shells damaged the third and fourth floor.

“The hospital was hit by nine shells, and the third and fourth floors have been damaged,” one witness in Taiz told Reuters.

Saudi Arabia, the world’s largest oil exporter which shares a long and porous border with Yemen, is worried violence in Yemen may strengthen al Qaeda militants based there who have launched attacks in the past on U.S. and Saudi targets.

In the capital Sanaa, tens of thousands of anti-Saleh protesters attended prayers on a main road. Some demanded the president be tried for what they called his crimes against the Yemeni people.

Separate prayers were held by thousands of Saleh supporters in the capital. There were no reports of violence in Sanaa.

The fighting in Taiz started on Thursday after gunmen shot and critically wounded a soldier stationed at a government building. This was followed by the killing of a pro-Saleh tribal leader and the wounding of one of his bodyguards.

U.N. envoy Jamal Benomar arrived in Sanaa on Thursday to encourage “an inclusive transition process that meets the needs and aspirations of all Yemenis,” a spokesman said.

Martin Nesirky, spokesman for U.N. Secretary-General Ban Ki-moon, said Benomar would report back to Ban, who is to inform the U.N. Security Council about the implementation of a resolution adopted last month that called on Saleh to accept a Gulf-brokered plan under which he would step down.

A statement issued by Saleh’s ruling General People’s Congress said they were edging closer to an agreement with the opposition alliance on a deal to end violence.

“The agreement, in its preliminary draft, is a mechanism with a timetable for the Gulf initiative and the U.N. Security Council,” the statement said.

“Its essence leads to a peaceful transfer of power and early presidential elections,” it added, noting the accord also calls for setting up a national unity government and a return of the army to barracks.

Saleh, who has clung to office despite pressure at home and abroad, has repeatedly wriggled out of signing the deal.

France has said the European Union will discuss freezing Saleh’s assets to increase the pressure for his departure.

The plan calls for Saleh to hand power to his deputy, Abd-Rabbu Mansour Hadi, who will oversee the formation of a national unity government ahead of an early presidential election.

Benomar met Foreign Minister Abubakr al-Qirbi in Sanaa on Thursday and was expected to meet Hadi, as well as opposition leaders who are due to return from a Gulf tour within days.