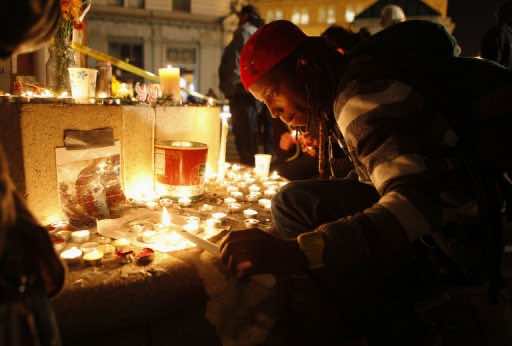 NEW YORK — Two shooting deaths at Occupy Wall Street-style camps in Vermont and California and a third fatality at a camp in New Orleans, where the body went unnoticed for two days, rocked the nationwide protest movement Friday.

In Burlington, Vermont, a man was found dead Thursday in his tent from a gunshot which the Burlington Free Press newspaper reported may have been self-inflicted.

News video showed police lifting the man’s body out of a tent in the park taken over by the anti-capitalist demonstrators.

Tensions rose at the camp when armed police ordered protestors out while the investigation unfolded. News footage from the Free Press showed the city’s mayor intervening to ask that police release a protestor they had detained, finally placating the angry crowd.

The Burlington Police Department could not be immediately reached for comment.

The protests aimed at fighting what is seen as corporate greed by Wall Street and big business first erupted in New York in mid-September.

But they have since spread to other US cities including the capital, Washington, and even abroad, with demonstrators camping in tents in key city squares.

In Oakland, California, news reports quoted Police Chief Howard Jordan saying a man at or near the camp was shot Thursday, apparently after a dispute, although it was not yet clear what relation the man had to the protest camp.

The protestors’ website, www.occupyoakland.org, only confirmed the death, saying “a man was shot and killed” in the early evening.

Following the shooting, Oakland Mayor Jean Quan was quoted as saying by the LA Times that the camp would have to be closed down. “Tonight’s incident underscores the reason why the encampment must end,” she said.

On Tuesday, a dead man was found in his tent at the Occupy New Orleans encampment across from the City Hall, the protestors’ website said.

Local news reports quoted the coroner’s office saying the 53-year-old man, showing no signs of trauma, appeared to have been dead for at least two days before he was discovered.