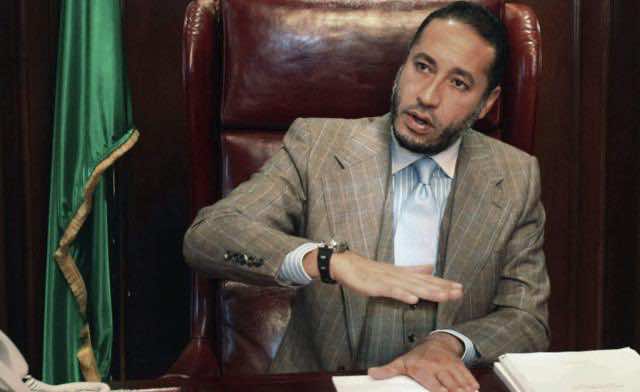 Niger has decided to grant Muammar Qaddafi’s son Saadi asylum for humanitarian reasons, President Mahamadou Issoufou said Friday, adding that his brother Saif al-Islam is not in the country. He also denied that his country had seized the dangerous surface-to-air missiles left behind by Qaddafi’s retreating army.

“We have agreed on agreed on granting asylum on Saadi Qaddafi for humanitarian reasons,” Issoufou told a news conference at the end of a two-day visit to South Africa.

“Saif al-Islam is not inNiger. I would have to consider what to do if he comes,” he said, according to AFP.

“We will deal with issues in terms of law and democracy and international agreements.”

Saadi Qaddafi, 38, fled Libya across its southern frontier to Niger in August during the fall of Tripoli that ended his authoritarian father’s 42-year regime.

Niger’s Prime Minister Brigi Rafini said in September that there was “no question” of extraditing Saadi, at least until he could be assured of a fair trial in Libya.

Saif al-Islam, who is wanted by the International Criminal Court in relation to crimes against humanity allegedly committed during the crackdown against Libyan protests.

No dangerous surface-to-air missiles left behind

Meanwhile, Niger’s minister of defense denied on Friday that his country had seized the dangerous surface-to-air missiles left behind by Qaddafi’s retreating army, which military experts now fear are being sold to terrorist organizations that operate in the Sahel.

“We have not found any surface-to-air missiles yet,” Minister of Defense Mahamadou Karidio told The Associated Press by telephone from Niamey, the capital of landlocked Niger.

Niger is one of the world’s poorest countries which shares a massive border with Libya. It is through this ungoverned desert border that three of Qaddafi’s generals, one of his sons and his chief of intelligence fled in convoys escorted by ethnic Tuaregs, the traditional inhabitants of the Sahara who fought alongside Qaddafi.

The stretch of desert separating Libya from Niger and Mali has also been used by arms smugglers and drug traffickers for decades.

Military experts are concerned about Qaddafi’s stockpile of SA-7 surface-to-air missiles, a shoulder-fired weapon that can be hidden in a PVC tube and looks like a rolled-up poster, said Africa expert Peter Pham, the director of the Michael S. Ansari Africa Center.

Not unlike the ‘stinger’ missiles that allowed the Afghans to take down Soviet planes, the SA-7s usually have an infrared red sensor on them, allowing fighters to aim them in the general direction of a passing plane. The weapon is powerful enough to take down a commercial jet in mid-flight.

Experts worry that the hundreds of surface-to-air missiles left behind by Qaddafi’s fleeing military are being sold to terrorist groups, including al-Qaeda in the Islamic Maghreb, al-Qaeda’s affiliate in North Africa.

The President of neighboring Chad told French weekly Jeune Afrique in March that he was “100 percent sure” that the al-Qaeda affiliate which operates in Niger, Mali, Mauritania and Algeria, had gotten their hands on Qaddafi’s surface-to-air missiles.

Meanwhile, Niger’s president said that his army has clashed repeatedly with arms traffickers from neighboring Libya, underlining the security threat posed by the fall of Qaddafi’s regime.

“We are very worried because this crisis will destabilize the whole region,” President Issoufou told reporters during a visit to South Africa, AP reported.