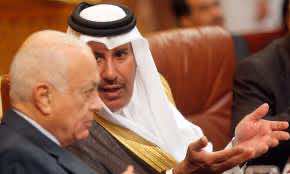 Syria’s representative to the Arab League said Saturday’s decision to suspend Damascus violated the organization’s charter and showed it was “serving a Western and American agenda.”

Youssef Ahmed told Syrian state television that the move to suspend Syria, which was opposed by two delegates at the Arab League ministerial meeting in Cairo, could only be taken by consensus at a summit meeting of Arab leaders.

The Arab League voted to suspend Syria’s membership at its meeting on Saturday and said it would impose economic and political sanctions against the regime of Bashar al-Assad as well as call for the withdrawal of Arab ambassadors from Damascus.

The Arab foreign ministers meeting at the League’s headquarters in Cairo also called on the Syrian army to cease its involvement in the killing of civilians and invited the Syrian opposition for transition talks.

Opponents of Assad were hoping that the Arab League would suspend Syria’s membership after Assad pressed ahead with a military crackdown on the unrest despite an Arab peace plan that urged him to end the violence.

The ministers attending an emergency session of the League called a recess early into the meeting to allow a narrowed ministerial committee to work out a final position, according to a source who was inside the meeting.

The source added that there was a strong push by some states to suspend Syria, while others wanted to give Assad’s regime more time.

According to Al Arabiya TV, Lebanon and Yemen voted against suspending Syria’s membership while Iraq abstained from voting.

Asked if there was any agreement on how the killing of civilians in Syria could be halted, Qatar’s Prime Minister Sheikh Hamad bin Jassim said that this issue would next be discussed at a meeting in Rabat, Morocco on Nov. 16, adding that “at the end it is Syria’s decision to stop the bloodshed.”

Bin Jassim said that there was no discussion on placing a no-fly zone on Syria or on arming the opposition.

“We were criticized for taking a long time but this was out of our concern for Syria,” he told reporters in Cairo. “We needed to have a majority in order to make these decisions.”

He also invited all Syrian opposition parties to a meeting at the Arab League headquarters “to agree a unified vision for the transitional period,” he said.

Arab League’s chief Nabil al-Arabi said the Syrian government has four days to respond to the bloc’s requests, adding that the organization has been pressing on Syria to end the bloodshed since mid-July.

Khaled al-Habbas, an assistant to Arabi, told reporters before the meeting that the situation in Syria was “complex” and “Arab countries are trying to find a solution that reconciles different viewpoints.”

The United Nations says 3,500 people have been killed in Assad’s crackdown on the protests.

Assad’s regime agreed on November 2 to an Arab roadmap which called for the release of detainees, the withdrawal of the army from urban areas and free movement for observers and the media, as well as negotiations with the opposition.

Meanwhile, Ahmed, Syria’s representative, told the ministers that Damascus was committed to implementing the agreement and had withdrawn heavy weapons from the streets of violence-hit cities, the source said.

But human rights groups say all the evidence is that the regime has actually intensified its crackdown on dissent, especially in Homs, killing at least 125 people in the flashpoint central city since signing onto the League’s deal.

Ahmed also condemned the United States for what he called “provocative interference” in his country’s internal affairs.

“We ask your generous council to take a clear position today to reject all statements and actions of some countries and foreign parties whose aim is for the bloodshed and violence in Syria to continue,” he said.

The crackdown has dragged on for seven months despite sanctions imposed by the United States, the European Union and others on Assad, his relatives and key aides.

Arab countries avoided any public pronouncements on Syria in the first months of the uprising, sparked by wider political upheaval that has removed the leaders of Tunisia, Egypt and Libya.

The conservative monarchies of Saudi Arabia, Kuwait and Bahrain ? all rivals of Syria’s ally Iran ? were among the first to break the silence and withdrew their ambassadors from Damascus. Libya’s new rulers have declared support for the Syrian opposition.

Lebanon, Yemen and Algeria are most opposed to confronting Assad, diplomats say, but other Arab governments also worry how their own restive populations would respond if he were forced to change course or even removed from power.

Diplomats were playing down the likelihood that Assad’s neighbors would present him with an ultimatum any time soon.

“The solution to the Syrian crisis has to be political and will not be reached in a short period but will take a long time,” a diplomat at the League told Reuters on condition of anonymity.

He would not be drawn on whether the League could freeze Syria’s membership or call for United Nations intervention.