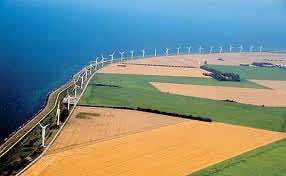 Morocco is developing a project that will be the largest in the world to combine two natural clean power allies, wind and water, in a hybrid power project rated at a little over 1 GW (1,070 megawatts) as part of Morocco’s ambitious renewable energy targets set just two years ago in 2009, to get 10% of its electricity from renewables by 2012 and a staggering 42% from solar by 2020.

The African Development Bank (ADB) has made an offer to invest $329 million of its own money in the groundbreaking hybrid wind and hydro-electric power plant.

Although seldom built in tandem as one project like this, hydro power is often used to provide storage for wind power. Water is pumped uphill with electricity from wind at times it is not needed on the grid, for example past midnight, when demand is low. Then it can be released to run the hydro electric turbines when the power is needed. A small wind-hydro hybrid began construction in the Canary Islands in 2010, but it is only one tenth of the size of this proposed hybrid.

With this bold investment offer by the African Development Bank the funding has gotten a jump start. Quite aside from the innovation aspect, the size of the project would double Morocco’s existing hydropower, rated at 1,205 MW.

The total cost of the hybrid wind and hydropower project will be $2.16 billion. As well as the African Development Bank, other investors are expected to want in on such a revolutionary idea, in a nation that has moved to the forefront in renewable development. As well as making the $329 million investment using its own money, the African Development Bank will also earmark an additional $150 million for the project from the Clean Technology Fund (CTF) which it helps to finance with other lenders.

You might not associate hydro power with a parched MENA nation, but in fact the entire African continent has enough hydropower potential to meet its entire electricity needs, and has tapped only 20% of it, according to a Hydropower Resource Assessment of Africa published a few years ago.

Most of the continent’s existing hydropower projects are in the North African nations of Morocco and in Egypt.

Since the power is to be used in Morocco’s isolated rural areas, it is another opportunity to get the world’s last few billion people without electricity straight onto the clean grid right away, bypassing the dirty grid altogether, and thus it is a very exciting investment opportunity with potentially world-changing effects over the long term.