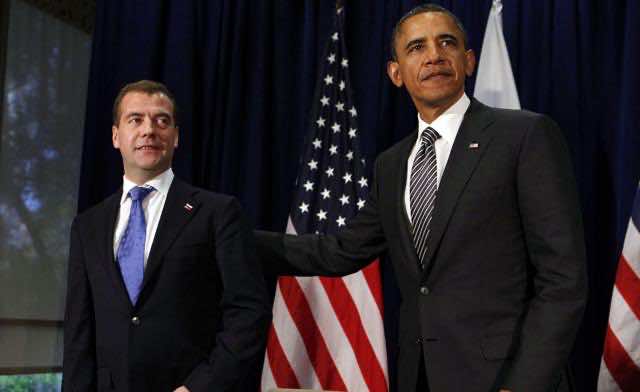 President Barack Obama engaged in high-level diplomacy with skeptical partners on Saturday, in an attempt to seek support from Chinaand Russia to confront Iran in the face of new allegations that it has been secretly trying to build a nuclear bomb.

Obama, after meeting with Russian President Dmitry Medvedev on the sidelines of an Asia-Pacific economic summit, said the two nations share a goal to “move Iran to follow its international obligations when it comes to its nuclear program.” Moments later, seated with Chinese President Hu Jintao, Obama said the U.S. and China want to ensure that Iran abides by “international rules and norms.”

U.S. officials said before the talks on the eve of the APEC summit in Hawaii that Obama would personally impress upon Medvedev deep U.S. concerns over a U.N. watchdog’s report that Iran worked on nuclear arms.

Still the statements were broad declarations that did not address the United States’ push for more sanctions against Iran.

Medvedev, for his part, was largely silent on Iran during his remarks, merely acknowledging that the subject was discussed. Hu did not mention Iran at all.

Moscow, along with China, is cool to a U.S. desire for more sanctions on Tehran following the release of the International Atomic Energy Agency report which heightened fears of Israeli military action against Iranian nuclear sites.

The two meetings presented the first opportunity for the three leaders to discuss Friday’s report. Tehran has rejected the material as a fabrication by the United States and its allies, maintaining its nuclear program is purely for energy and research

They said Washington would work with “like-minded states” to tighten a sanctions regime which U.S. officials believe has brought the Iranian economy to a near standstill.