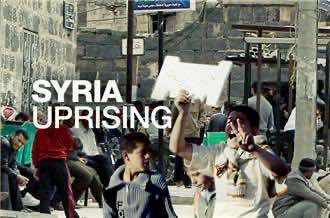 Syrians have reacted angrily to the decision by the Arab League to suspend their country as punishment for its failure to end its crackdown on pro-democracy protesters.

Syrian state television reported that thousands of people gathered in a public square in Damascus on Sunday to protest against the regional bloc’s decision, announced late on Saturday in Cairo.

The Arab League said it had given Syriaa three-day deadline to end its crackdown or face sanctions. If Syria failed to comply, the suspension would take effect on November 16.

The decision, which came after a meeting of Arab ministers in the Egyptian capital, did not amount to a full suspension of Syria’s membership from the regional body.

At the official level, Syria denounced the Arab League’s decision as “illegal and a violation of the organisation’s charter”.

Yussef Ahmad, Syria’s envoy to the Arab League, denounced the move as illegal, saying his country has already implemented an Arab peace deal that it previously agreed to, and accusing theUSof ordering the suspension.

He also charged that the regional bloc was trying to “provoke foreign intervention in Syria, as was the case in Libya”.

“It was clear [the decision] was decided through a US order,” Ahmad said, accusing the Arab League of working to an “American agenda.”

On the ground, local residents said hundreds of men, shouting slogans in support of Assad and armed with sticks and knives, broke into the Saudi embassy in Abu Rummaneh, three blocks away from Assad’s offices in one of the most heavily policed areas of Damascus.

They smashed windows and ransacked some areas, prompting the Saudi foreign ministry strongly to condemn the attack and hold the Syrian authorities responsible for protecting its interests.

Syrian security forces confronted the protesters with batons and tear gas but were unable to stop a group from breaking into the Qatari embassy and bringing down the Qatari flag, replacing it with the Syrian flag.

Reports said crowds also attacked the French and Turkish consulates in the coastal city of Latakia.

The developments in Damascus came after Sheikh Hamad bin Jassim Al Thani, the Qatari prime minister, announced on Saturday that the Arab League would “suspend Syrian delegations’ activities in [the group’s] meetings” and implement “economic and political sanctions against the Syrian government”.

The Arab League also called on its member states to withdraw their ambassadors from Damascus and threatened to recognise the Syrian National Council (SNC), a broad-based opposition group, if Syria did not implement an Arab peace deal that it previously agreed to.

Sheikh Hamad said that 19 member countries voted in favour of the measure, while Lebanon and Yemen objected and Iraq abstained.

Al Jazeera’s Jane Arraf, reporting from Cairo, said: “The Arab League could have imposed immediate sanctions or suspended Syria outright, but surprisingly did not do that. It wanted to send a very strong message to Syria.”

Sheikh Hamad said: “We were criticised for taking a long time but this was out of our concern for Syria. We needed to have a majority to approve those decisions.

“We are calling all Syrian opposition parties to a meeting at the Arab League headquarters to agree a unified vision for the transitional period.”

For months now, Syria has experienced daily clashes between security forces and protesters, and human-rights groups say the Assad government has intensified its crackdown, especially in the flashpoint city ofHoms.

At least 25 people were killed in violence in Syria on Friday and Saturday, most of them civilians in Homs, which an opposition group declared a “humanitarian disaster area” earlier this week.

At least 13 people died, nine of them members of the security forces, in clashes in the northwestern province of Idlib on Saturday, the Syrian Observatory for Human Rights, a London-based Syrian organisation, said.