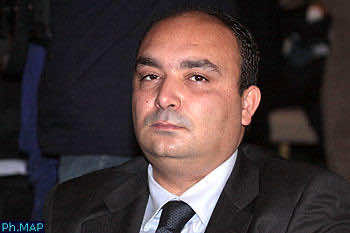 Morocco’s Youth and Sports Minister Moncef Belkhayat strongly regretted assault against Moroccan spectators, after the second leg of the African Champions League final between Tunisia’s Esperance and Morocco’s Wydad Cassablanca on Saturday at the Rades Stadium in Tunis.

“I cannot understand why, during a moment of jubilation for the Tunisian brothers who celebrated their victory, Moroccan spectators were attacked by some members of Tunisian police, using tear gas, far from the spirit that should prevail in a football match,” Belkhayat told MAP news agency.

The Minister said he would follow this case with his Tunisian peer, Salim Chaker, and Morocco’s ambassador in Tunis to clarify circumstances of these acts and take the necessary measures so that these assaults will never happen again.

For his part, Chaker said he would work with Tunisia’s Interior Minister to shed light on what has happened at the Rades Stadium, adding that anti-sports acts are common in several football games.

“The main thing is to show restraint, as Morocco-Tunisia relations are above all other consideration,” he said.

According to eyewitnesses, Wydad’s fans were subjected to assault and violence, after the game, by some Tunisian cops who used truncheon and tear gas, leaving many Moroccans wounded.