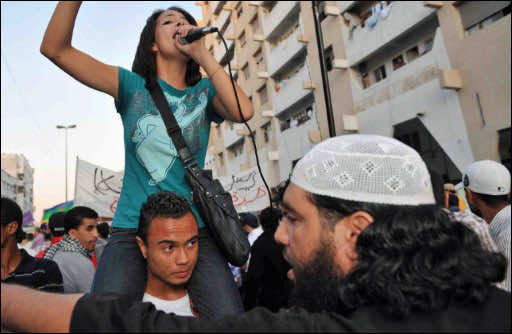 Al-Qaeda is desperate to build up its numbers. The organisation is scrambling to attract Arab youths, extend its network and carry out attacks in lands that have long been immune to the development of terrorist cells.

For many years, sub-Saharan Africa and the Sahel region have been home to terror groups linked to the al-Qaeda network. What is new is that attacks are now being committed by young people who never stepped foot on Afghan soil and never saw a terror training camp.

The message is reaching its target. In the midst of the popular uprising against Moamer Kadhafi’s regime, two young Tunisians were arrested in their homeland for possessing belts laden with Libyan explosives. Algeria and Morocco face the same threat. Secret services there have arrested several young people for establishing contacts with terrorist networks.

These “lone wolves”, or solo operators, such as the 25-year-old behind the deadly Marrakech bombing, need no large cell but instead act as subcontractors of al-Qaeda to carry out attacks.

One thing is certain: the internet has become an indispensable tool for al-Qaeda. New members are reeled in long-distance by al-Qaeda operatives in the Sahel, Yemen, Iraq and Afghanistan. They then absorb jihadist ideology and learn to make improvised explosive devices online rather than in terror training camps.

With all that is happening in the Arab world, it is important to prevent the proliferation of online extremism. Al-Qaeda is clearly eager to take advantage of the instability to recruit more young people.

The societal metamorphosis in the Maghreb region must be better understood, however, in order to effectively bar the way to those preaching violence.

In many countries across North Africa, the unemployed and the disabled have mobilised themselves, demanding not only their rights, but also their dignity. In this sense, the self-immolation of Mohamed Bouazizi was a protest of a new kind, giving voice to those who have long been excluded from the public arena in Tunisia.

This example shows that there can be disastrous consequences if those shaping public life do not bring young people into the social and political arenas of their countries. Indeed, social recognition is a major consideration for a large proportion of young people who, in an effort to “find themselves”, end up visiting malevolent websites run by terror group recruiters.

This is why it is important to activate those mechanisms that help young people integrate into society. The first is education and training, delivered by an enterprising, modern school system that responds to the demands of globalisation. A seamless move from training to the labour market is essential.

Political parties also have a role in this integration. Disaffection and alienation among young people is a direct consequence of the passive approach adopted by some political actors. It is a barrier to other democratic opportunities, which could drive some desperate young people completely off the rails.

“Lone wolves” are actually lost souls. In a world undergoing a complete social metamorphosis, they are easy prey for terrorist groups.

Given the shared threat faced by the entire region, it is important to work towards an economically sound and socially united Maghreb.

The move towards this critical cohesion is already taking under way. Just this week, senior government officials from Algeria, Mauritania, Mali and Niger met with their US peers in Washington to continue the counter-terror co-operation talks begun at the Sahel security summit in Algiers.

The adoption of a shared regional policy is a necessity for Maghreb countries that hope to avoid the cyber-terrorism syndrome.

It is therefore urgent to find a solution to the conflict between Morocco and Algeria. As recently as Sunday, King Mohammed VI of Morocco again called on Algeria to co-operate in building a new Maghreb that could be a “real engine of Arab unity” and help ensure stability and security in the Sahel region.

“Morocco reiterates its willingness to do everything possible…especially with sister Algeria, to achieve a new Maghreb order,” the monarch said.

Such a partnership is necessary to protect Maghreb youth and put a stop to al-Qaeda’s infiltration of the social fabric of an entire region.

*Dr. Cherkaoui Roudani, author of several scientific studies on terrorism and governance, is a Poitiers-based policy and strategic affairs consultant for France 24 and Medi 1. He is also a contributor to Le Matin, Al-Arabiya, Akhbar-Al youm and other media outlets in the MENA region.