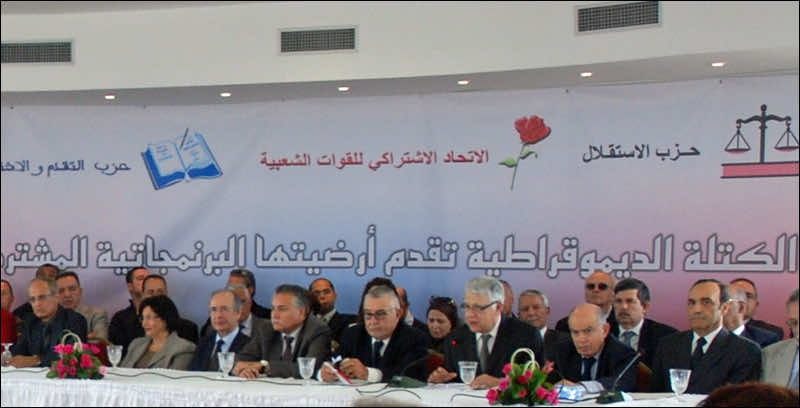 Morocco’s Koutla political alliance could soon have a new member. As the kingdom prepares for legislative elections on November 25th, the three-party coalition is considering a partnership with the Justice and Development Party (PJD) to secure a governing majority.

No official announcements have been made yet, as Koutla, which forms part of the current government, does not want to seal a pre-election alliance with an opposition party. Koutla is comprised of the Istiqlal Party, the Socialist Union of Popular Forces (USFP) and the Party of Progress and Socialism (PPS).

The three parties have been scathingly critical of the fact that their governmental allies – the People’s Movement and the National Rally of Independents – have formed a coalition with six other opposition parties.

Moroccan Prime Minister and Istiqlal Party Secretary-General Abbas El Fassi said at a November 2nd press conference that it was time to modify the governing alliance. The current administration has been “dogged by a lack of solidarity and homogeneity between the components making up the government”, according to El Fassi.

These mistakes, he said, were due to the fact that the government includes members with diverging views.

“It’s time to change this situation, because the pro-capitalism parties cannot get on with the parties that defend social causes,” the prime minister said at a November 2nd press conference. “Within Koutla, we haven’t yet discussed the idea of expanding this framework, but we are open to parties that share our principles.”

The Koutla parties have indicated that they feel sidelined by their traditional allies. The coalition hopes to win a majority of seats in the upcoming elections – a goal that could be within their grasp if they can achieve reconciliation with the PJD, according to political analyst Najib Tadlaoui.

Tadlaoui said that the polling system currently in place does not allow one party to win a comfortable majority and form a government on its own. As a result, both Koutla and the PJD would need to find other parties and form a coalition.

Koutla party leaders have defended the PJD recently, despite their criticism of the party in the past, Tadlaoui noted. For instance, the PPS Secretary-General Nabil Ben Abdellah, who once opposed an alliance with the PJD, recently said there was no reason to demonise the party.

Abdellah said that despite the differences between his party and the PJD over civil liberties, religious affairs and the dropping of Morocco’s reservations concerning the Convention on the Elimination of All Forms of Discrimination Against Women, the PJD helped to stabilise the country and its institutions by not joining the February 20 protests.

The PJD’s leaders have welcomed the idea of reconciliation with Koutla. The party’s deputy general secretary, Lahcen Daoudi, said that the PJD feels close to the Koutla parties as the latter have a social focus. It wants to find reliable allies so that it might leave the opposition benches.