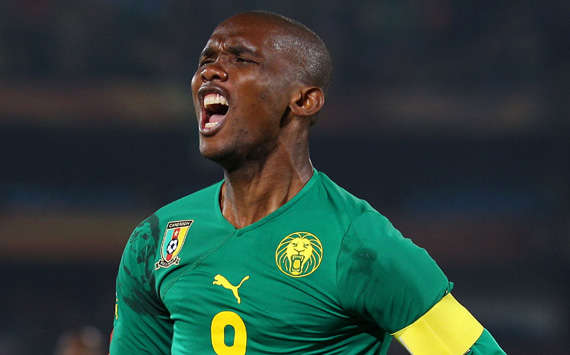 Cameroon claimed the LG Cup by defeating hosts Morocco 4-2 on penalty kicks after the sides were locked 1-1 after 90 minutes.

Samuel Eto’o struck for the guests before Nordin Amrabat levelled to send the match to spot kicks, but it was the Indomitable Lions who held their nerve to maintain their unbeaten record against their North African counterparts.

After seeing his players surprisingly fail in the opener against Uganda, home coach Eric Gerets made some changes to his side, most notably replacing Adel Taarabt with Oussama Assaidi on the wing and Youssef El Arabi with Youssouf Hadji in attack.

The hosts kicked off proceedings, dominating possession in the early going. Despite their pressure, the first true goal scoring chance of the game fell to Henri Bienvenue on 22 minutes, forcing a fine save from Atlas Lions goalkeeper Mohamed Amsif.

Morocco continued to push for the opener, primarily through Assaidi’s left flank. However, on one of the rare instances where they attacked from the right side, Mehdi Carcela-Gonzalez and Hadji combined to good effect, yet the Anzhi Makhachkala representative pulled his shot wide.

Two minutes later, Cameroon responded through a zigzagging Vincent Aboubakar run that culminated in Bienvenue blasting an effort that was once again expertly parried by Morocco’s Amsif.

The second half began much as the first did, and the additions of Mbark Boussoufa, Nordin Amrabat and Taarabt gave the North Africans more incisiveness up front. However, the final touch continued to elude them.

In a similar scenario to their previous encounter against Uganda, the Atlas Lions were stunned in the 72nd minute. The finish came from Eto’o, who dispatched a left footed strike with typical ruthlessness.

It took some time for the hosts to recover but they eventually got on the scoresheet when Boussoufa found a wide-open Amrabat in the penalty area. The 24-year-old maintained his composure to score his first international goal in Moroccan colours.

The equaliser set up a furious finish to the match, with both teams missing chances, sending the game directly into a penalty shootout.

Penalties ended 4-2 in Cameroon’s favour after Taarabt hit the post and Amrabat had his attempt saved.

The win marks a successful start to the Denis Lavagne era for the Indomitable Lions while Gerets will surely be looking forward to the return of Mehdi Benatia and Abdelhamid El Kaoutari after his side’s defensive lapses during this competition.