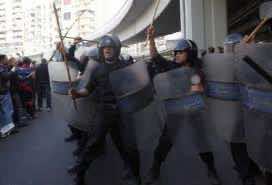 Syrian security forces on Sunday killed 26 people, including a dozen from the flashpoint city of Hama, Local Coordination Committees reported, amid heightening Arab and International pressure on the regime of embattled President Bashar al-Assad.

Earlier, the opposition group reported in its Website that 12 were killed in Hama, 6 in Homs, 3 in Daraa, and a martyr in Deir Ezzor and in Kanaker.

The groups reported that dozens were detained in an arrest campaign in the Damascus suburb of Daraya. In Homs a demonstration was staged in front of the Ghassaniyeh church in Almahatta neighborhood, meters (yards) away from the military intelligence division. Protesters chanted: “Muslims and Christians, we all want freedom,” the according to group.

Arab League foreign ministers on Saturday voted 18-22 to suspend Syria with effect from November 16 over its failure to comply with an agreement to end the bloodshed, in which according to the United Nations at least 3,500 people have died since mid-March.

The League also recommended the withdrawal of Arab envoys from Damascus and agreed on sanctions, while inviting “all currents in the Syrian opposition” to meet at its headquarters in Cairo to map out a transitional period.

The move won widespread praise from the international community and was hailed by the opposition Syrian National Council, which said the decision was a “step in the right direction.”

“We have decided on a meeting of foreign ministers of the Arab League on Nov.16 in Rabat, on Syria…” on the sidelines of a forum between Turkey and the Arab nations, Belani told AFP on Sunday.

The League said it was studying mechanisms it could implement to protect civilians in Syria, where according to rights activists security forces killed at least another eight people Sunday as they pressed their crackdown on dissent.

Turkey and France on Sunday summoned Syria’s envoys to protest against attacks on their diplomatic missions in the country.

Turkey sent a diplomatic note to Syria calling for a guarantee its diplomats in the country would be protected, the Turkish Foreign Ministry said.

It said in a statement it had begun to evacuate the families of Turkish diplomats in Syria and called on Damascus to find and prosecute those behind the attacks on Saturday evening.