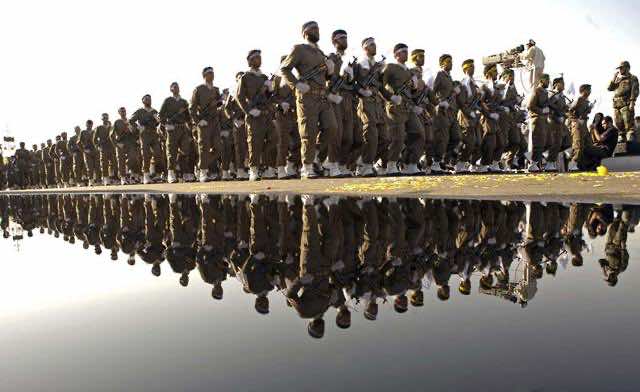 Iran has rejected claims by Manama that it has links to a “terrorist” cell busted in Bahrain, state television’s website reported on Monday.

Amir Abdolahian, a deputy foreign minister in charge of Arab and African affairs, was quoted as saying that the “baseless allegation” had been “fabricated by the United States.”

“Intensifying the security atmosphere in Bahrain and pursuing the ineffective policy of Iranophobia will not lead to solving the problem,” the website quoted him as telling Iran’s al-Alam Arabic language satellite television channel late Sunday.

“It is necessary for the Bahraini officials, instead of deflecting (their problems) and making these baseless allegations, to work on trust-building to solve the chasm created between the regime and the people,” Abdolahian added, according to AFP.

Bahrain’s judiciary on Sunday linked a busted “terrorist” cell to Iran’s Revolutionary Guards, a day after announcing the arrest of five Bahrainis planning attacks in the Arab kingdom.

The five men are accused of belonging to a “terrorist group” with ties to the intelligence services of a foreign state, a judiciary spokesman said, quoted by state news agency BNA.

The spokesman said the five were to be “sent to Iran to receive military training,” notably with the elite Revolutionary Guards.

The cell broken up in Bahrain planned to murder prominent Gulf figures, Al Arabiya reported on Sunday, quoting the prosecutors’ office in Bahrain.

Bahraini member of parliament Adel Assoumi told Al Arabiya that there “strong evidence” suggests that Iran and the Lebanese Hezbollah group was behind the terrorist cell.

On Saturday, the interior ministry said a cell had been broken up that was planning to attack the ministry, the Saudi embassy in Riyadh and the causeway which links the archipelago state to Saudi Arabia.

Citing alleged confessions from the suspects, the judiciary spokesman said the cell had been set up by two men he named as Abderrauf al-Shaieb and Ali Mashaima, living abroad, through contacts with the five accused.

“They coordinated with military structures abroad, including the Revolutionary Guards and the Basij (militia) in Iran to train the recruits of the group in handling arms and explosives,” he said, without giving further details of the two alleged masterminds.

Earlier on Sunday, the Gulf Cooperation Council (GCC) urged its member states to exercise “caution and vigilance” after the Bahraini announcement of the five arrests.

He welcomed the security cooperation between Bahrain and Qatar that he credited with having foiled the alleged attacks.

In an apparent reference to Iran, Zayani said the alleged plot reflected “desperate attempts … of continuous interference in the internal affairs of the kingdom of Bahrain and other GCC countries.”

Activists among Bahrain’s Shiite Muslim majority began a series of mainly peaceful demonstrations in the capital in February, pushing for more political freedoms and better living conditions, inspired by the Arab Spring uprisings across the Arab world.

The country’s Sunni rulers, helped by Saudi security forces, crushed the demonstrators, who they said had been supported by predominantly Shiite Iran. Tehran has denied involvement in the unrest in Bahrain, a U.S. ally which hosts the U.S. Fifth Fleet, according to Reuters.

Last month U.S. authorities said they had broken up a plot by two men linked to Iran’s security agencies to assassinate the Saudi ambassador to the United States, Adel al-Jubeir. One of the two was arrested in the United States last month and the other was believed to be in Iran.

Iran has denied the allegations.