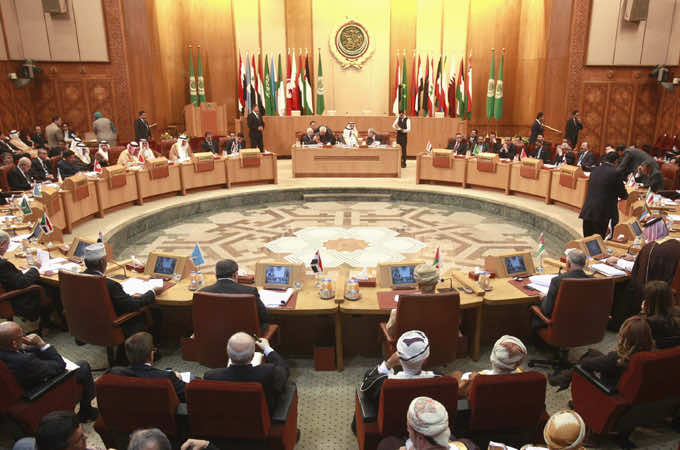 Syria’s foreign minister has condemned the Arab League’s threat to suspend the country over its crackdown on protests, saying the move would be “illegal” and a “dangerous step”.

“The suspension of the Arab League membership is illegal,” Walid al-Muallem told a press conference in Damascus on Monday.

Al-Muallem also criticised the Cairo-based regional bloc’s relations with the United States, calling the US an “unofficial member” of the league.

“The Arab League said it worked for stopping the violence in Syria and said the US is not a member of the Arab League… but they are an unofficial member,” he said.

Al-Muallem added that he was confident Russia and China, who have rejected calls for tougher international action against Damascus, would not change their stance on Syria at the UN Security Council.

The foreign minister also apologised for attacks on foreign diplomatic missions over the weekend. Government supporters raided the Qatari and Saudi embassies in Damascus on Saturday night. On Sunday, the Turkish embassy and consulates were attacked.

Addressing Syrians, al-Muallem said: “You should not feel any worry regarding the future. [Syria] will come out stronger due to the will of the people and national unity.”

Syria on Sunday called for an emergency meeting of Arab heads of state to discuss the crisis in the country.

It was unclear whether the Arab League would agree to convene an emergency meeting or would suspend Syria at the bloc’s meeting on Wednesday, said Al Jazeera’s Nisreen el-Shamayleh, reporting from the Jordanian border.

Shamayleh said “suspending Syria from the Arab League, in the eyes of many, would attract foreign intervention from outside the Arab world”.

The Arab League had given Syria until November 16 to end its violent crackdown on protesters demanding President Bashar al-Assad’s resignation or face suspension from the regional body.

“This has been a bad week for Syria, a founding member of the Arab League,” Salman Shaikh, the director of the Brookings Doha Centre told Al Jazeera.

Earlier on Monday three people were killed as Syrian security forces continued to shell the Bab Amro neighbourhood in Homs, according to activists from the Syrian Revolution General Commission.

European Union governments reached a preliminary agreement on Monday to extend sanctions against Syria to more individuals associated with a violent crackdown on dissent, an EU official said

The agreement by ambassadors of the 27 EU states, was expected to be confirmed by EU foreign ministers meeting later in Brussels, who will also endorse a decision to stop Syria accessing funds from the European Investment Bank, the official said.

Catherine Ashton, the EU foreign policy chief, said she was in close contact with the Arab League to work on an approach to Syria.

“The situation in Syria causes enormous concern. I spoke last night to the secretary general of the Arab League and expressed our commitment to working closely with them,” she said.

Meanwhile, neighbouring Turkey ratcheted up rhetoric against Syria after attacks on Turkey’s embassy in Damascus and consulates in the cities of Latakia and Aleppo over the weekend.

Ahmet Davutoglu, Turkey’s foreign minister, told the Turkish parliament it was no longer possible to trust the Assad’s

“We will take the most resolute stance against these attacks and we will stand by the Syrian people’s rightful struggle,” he said.

Syrian security forces have responded with lethal force in a bid to crush unprecedented protests against Assad’s rule. The United Nations estimates that at least 3,500 people have died since the protests began in March.