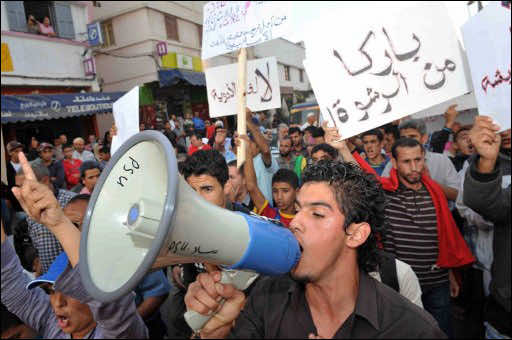 Just a few days ahead of the November 25th elections, political debate has intensified in Morocco. Political leaders have been active on all fronts, giving their explanations and trying to convince people of their readiness to lead.

The issue is heating up. On Sunday, thousands of Moroccans marched through the streets of Casablanca to call for a boycott of elections. The protesters were organised by the February 20 Movement, which holds that the constitutional reforms initiated earlier this year fall short of their demands for greater democracy and the end of corruption.

“We must be prepared for at least three or four years of socioeconomic difficulties, and we must say this to the people, because Morocco does not live apart from its global economic environment,” said Nizar Baraka, a member of the Istiqlal executive committee.

He added that Istiqlal intends to respond to the expectations of young people concerning work, training and education.

Moncef Belkhayat, from the National Rally of Independents (RNI), said that the Moroccan political parties are faced with a real credibility problem: “We need a February 20th Movement to bring about a revolution within the parties.”

Political analyst Mohamed Darif said it is essential for Moroccan political parties to keep themselves informed and to form a political elite that is accountable and capable of providing for the needs of the youth.

A political conference held recently in Casablanca saw political leaders questioned by a crowd of youths. Many expressed the opinion that political activities are lacking meaning and credibility. One young female student said, “The Moroccan people have given you so many chances to improve their situation, but nothing has changed, and the people’s daily lives only worsen from one year to the next.”

“As long as schools and public health continue with this ongoing catastrophe, it’s impossible to see how the public could believe in your promises and plans,” she said.

PJD General-Secretary Abdelilah Benkirane summarised youth concerns within the problem of good governance: “What we don’t have is transparency in the management of public affairs, which means that officials can go along without being held to account.”

He expressed his opinion that this is the real challenge which must be tackled, to give credibility to political activities and reconcile the public to politics.

Observers are unanimous in stressing that the elections on November 25th are likely to prove difficult for Moroccan political actors, particularly in the midst of great economic difficulty marked by equally great tension in society.