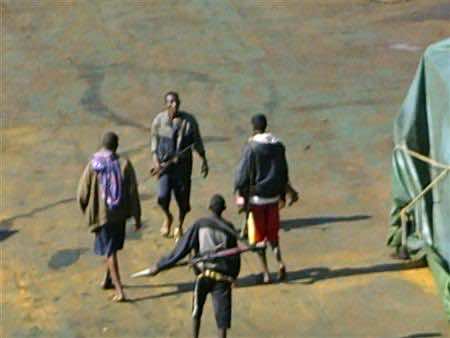 Britain will host an international conference next year on tackling instability in Somalia and protecting ships from pirates in the Gulf of Aden, Prime Minister David Cameron said on Monday.

The prime minister described the east African nation as a “failed state that directly threatens British interests,” citing attacks on tourists and aid workers, and radicalisation of young Britons by militant Islamist groups with roots in the region.

Cameron announced last month that British merchant ships sailing off the coast of Somalia would be able to carry armed guards to ward off pirate attacks, bringing it into line with many other countries.

“Somali pirates aren’t invincible: they are violent and lawless men in small boats and it is time we properly stood up to them,” Cameron said in a speech at a banquet to honour the new Mayor of the City of London.

“But there is a real and pressing need to pull together the international effort,” Cameron said in the speech, traditionally a forum for setting out foreign policy priorities. “That is why Britain will host a major conference in London next year.”

Cameron has been strengthened by a foreign policy success after Britain and France took the lead in international military efforts to support Libyans who rose up and eventually overthrew Muammar Gaddafi, in power for four decades.

The Somali conference was to “focus attention on protecting merchant ships passing through the Gulf of Aden, tackling pirates, pressurising the extremists, supporting countries in the region and addressing the causes of conflict and instability in Somalia.”

The date of the conference was not announced.

Somalia was formed in 1960 from a former British protectorate and an Italian colony. It descended into chaos after the 1991 fall of dictator Mohammed Siad Barre. The government of President Abdiqassim Salad Hassan controls only areas of the capital.