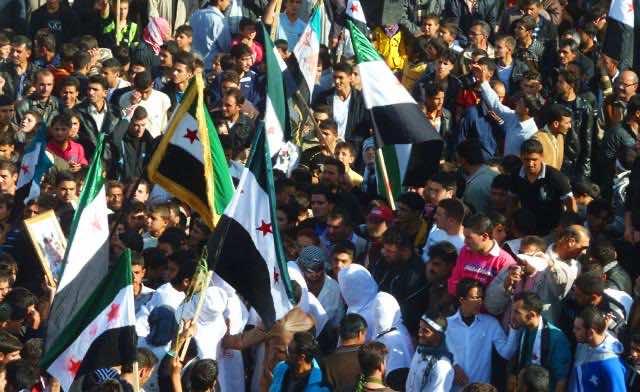 International pressure on Syria increased, with calls for President Bashar al-Assad to quit as Syrian activists say that as scores of people were reported to have been killed across Syria.

More than 70 people were killed in violence across Syria on Monday, one of the bloodiest days since an anti-regime uprising began eight months ago, according to a new toll by activists on Tuesday.

The Britain-based Syrian Observatory for Human Rights said 27 civilians were shot dead by security forces while 34 soldiers and 12 suspected army deserters were killed in clashes.

Most of the victims were killed in the southern flashpoint province of Deraa, the Observatory said in a statement received in Nicosia.

Meanwhile, Arab League Secretary-General Nabil al-Arabi said Monday he received the Syrian governments request for an emergency Arab summit and that 15 countries must approve the request for the meeting to be held, Al Arabiya reported.

He said he has received a letter from Syrian Foreign Minister Walid Muallem calling for the summit to discuss the crisis. Arab leaders have been informed of the request, the secretary general said, adding that the emergency summit can only be held if two-thirds of the bloc’s members endorse the call.

Arabi said that the organization is preparing to send observers to Syria but needs guarantees from Damascus on their mission and the rights of each side.

The decision to send a 500-strong delegation follows a vote to suspend Damascus from the 22-member Arab bloc over its deadly crackdown on protests. It came a day after Syria said it would welcome such a mission.

Muallem called the Arab Leagues decision to suspend the country’s membership very dangerous and said the bloc had given in to external pressure. U.S. support for the organizations decision was incitement, he said on Monday during a news conference televised from Damascus.

“None of the delegates of Arab organizations tasked with protecting civilians will go to Syria until a clear memorandum of understanding is signed with the Syrian government spelling out the duties and rights of all the parties,” Arabi told reporters, according to AFP.

He made the remarks after separate talks in Cairo with representatives of Arab human rights groups and Syrian opposition figures.

Arabi chaired a meeting of the groups at which it was agreed a 500-strong delegation made up of rights activists, media and military experts would head to Syria on a fact-finding mission to study measures to protect civilians.

Arab foreign ministers are due to organize the trip and set a date for the mission on Wednesday, on the sidelines of a meeting in Rabat, according to a League official.

A senior member of the Union of Arab doctors, Ibrahim al-Zaafarani, said Syrian authorities will be asked to sign a document providing the delegation “guarantees” for their protection and freedom of movement.

“We will go everywhere and write up reports on the conditions of civilians and means of protecting them, and we will submit the reports to the Arab foreign ministers,” he added.

The Arab League on Saturday voted to suspend Syria from all Arab League activities over its failure to implement a deal to end the violence which has left around 3,500 dead since March, according to U.N. figures.

Syria on Sunday said it would welcome a dispatch of an “Arab ministerial delegation accompanied by observers, civilian and military experts and Arab media,” according to an official statement.

It said the delegation would be able to see for itself the situation on the ground “and supervise, in coordination with the Syrian government, the application of the Arab (peace) plan.”

The plan to end violence in Syria was drawn up by Arab foreign ministers on Nov. 2 and endorsed by Syria.

Under the deal, Syria was given 15 days to pull back its troops from the cities that were the focus of anti-government protests, release detainees, allow free movement for observers and media, and negotiate with the opposition.

Meanwhile, the European Union widened its sanctions on Syria, while King Abdullah of Jordan said Assad should step down. In Saudi Arabia, the Jeddah-based Arab News, which has links to the kingdom’s royal family, published an editorial yesterday with the headline ‘It is time for Assad to go.’

The White House said on Monday that Syrian President Assad was increasingly isolated and reiterated Washington’s position that he had lost his legitimacy to rule and should go.

“It is clear that the Assad regime is continuing to be isolated, that the political pressure on them is building,” said White House spokesman Josh Earnest, according to Reuters.

The EU, meanwhile, added 18 people in Syria alleged to be responsible for human-rights violations to a list of those targeted by an asset freeze and travel ban, according to an EU statement.

Assad has blamed foreign provocateurs and Islamist militants for the violence surrounding anti-government protests that erupted in March.