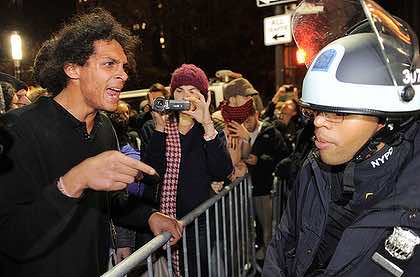 “Liberty Square [Zuccotti Park], home of Occupy Wall Street for the past two months and birthplace of the 99% movement that has spread across the country and around the world, is presently being evicted by a large police force,” the demonstrators said in a statement released on Tuesday.

“It seems like the New York Police Department came out about a half an hour ago, about 1:15 in the morning here in New York City, and have surrounded the park. Dozens, perhaps hundreds, of police started moving people from their tents.

“At the moment there are maybe a couple hundred people who are still sleeping down at Zuccotti Park for the Occupy Wall Street movement. They started pushing them out their tents and started clearing them out and pushing them away from the park.”

According to police officials, most of the protesters left peacefully. However, 15 people were arrested for disorderly conduct and resisting arrest.

The office of Michael Bloomberg,New York’s mayor, said that protesters should dismantle their tents and “temporarily leave” the park.

“Occupants of  Zuccotti should temporarily leave and remove tents and tarps. Protesters can return after the park is cleared,” the office said on the micro-blogging website Twitter.

Police spokesman Paul Browne said the city and the owners of the park, Brookfield Office Properties, had issued fliers to the protesters saying that the park would be cleared for cleaning.

The flier said the city and Brookfield had decided “that the continued occupation of Zuccotti Park posed an increasing health and safety hazard to those camped in the park, the city’s first responders and the surrounding community”.

Browne added that protesters may return after the park is cleared, but without their tents and belongings.

However, our correspondent at the scene said that it had not appeared police intended on cleaning up anything.

“They haven’t even pretended to clean the park. This is a genuine attempt to dismantle any kind of occupation, any kind of settlement here. So I think the cleaning has gone out the window and really it’s just a complete sweep through. There will hardly be anything left.”

Protesters set up camp in Zuccotti Park on September 17 as a focus for dissent against a financial system they argue mostly benefits corporations and the wealthy. The movement has sparked similar protests against economic inequality both nationally and internationally.

Police on Monday moved into an encampment by anti-Wall Street protesters in Oakland, California, clearing out occupants and and taking down tents, while in Portland, Oregon, police confronted an estimated 1,000 protesters on Sunday.