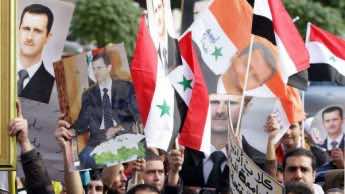 A fracas broke out between two rival Lebanese politicians on live television in Beirut Monday after a discussion about the situation in neighbouring Syria escalated out of control.

Rival Lebanese politicians came to blows live on national television over the crisis in neighbouring Syria, hurling insults — and chairs — at each other before the show cut to a commercial break.

“You don’t listen. I wish you would listen to what Assad says,” said Shukr, to which Alloush responded: “I heard him. I don’t believe a word he says.”

“Who are you to believe or not believe him?” Shukr said, prompting Alloush to call Assad a “liar.”

The two then proceeded to hurl insults and swear at one another, before Shukr chucked a glass of water over the talkshow host’s head at the MP.

Papers and insults flying, both men then jumped out of their seats and charged at each other, with one picking up a chair as their bewildered host urged them to calm down before the show went off the air.