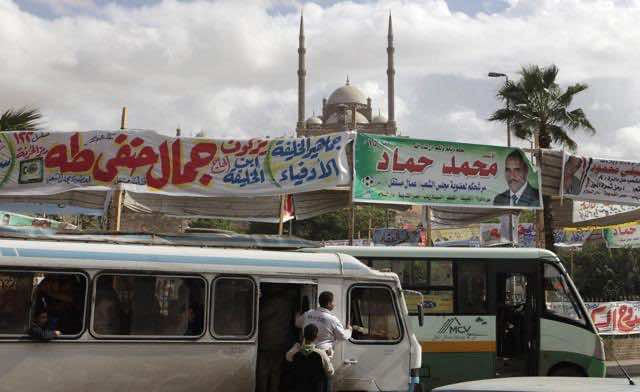 Egyptians are facing a blizzard of posters and TV adverts seeking their votes in the first free parliamentary election in decades but some campaigners are turning to tricks like tearing down rival posters in a race where every vote counts.

The vote offers Egyptians the first real chance to choose who represents them. During Hosni Mubarak’s 30-year rule, intimidation, ballot stuffing and graft ensured landslide wins for his ruling party.

No one expects a return to that kind of routine rigging but, with everything to play for, the gloves have come off before staggered voting starts on Nov. 28.

Liberal parties accuse the well-funded Muslim Brotherhood of spreading more than its usual largesse to win votes. Many expect it to form one of the biggest blocs in parliament although analysts question whether it can secure a majority.

The group, respected for its track record of charitable work, has been handing out meat to prospective voters.

In one village, the Brotherhood’s Freedom and Justice party is offering half-price medicines and sponsored a football match, newspaper al-Dostour reported.

Its rivals rail against what they see as thinly-veiled vote buying by the Brotherhood, employing the kind of tactics Mubarak’s party candidates were once derided for using. But some liberal parties are involved in such offers too.

“The politics of the old regime has not given way in this new landscape,” said Nora Soliman, spokeswoman for the Justice Party. “People ask us why we are not giving out meat. We tell them we want to give them the tools to buy their own meat.”

Mubarak was toppled in a popular uprising on Feb. 11.

Now, with more than 6,000 candidates running on independent lists and Mubarak regime die-hards attempting to recycle their political careers via other parties, voters might be forgiven for feeling disoriented.

With 14 days to go, court battles are underway to have former members of Mubarak’s party barred from running and the election committee has still to publish a definitive list of candidates.

To get a head start on the mass of rivals, the best-funded parties are plastering the streets of Cairo with giant portraits of candidates and the simplest of slogans.

“Your life is better with the Freedom and Justice party,” declares the Islamist group. “Your right is your right,” proclaim the liberal Free Egyptians.

In wealthier corners of the capital where more liberal views prevail, opponents of Islamist parties have been removing Islamist banners. But liberal parties can suffer the same fate.

“Brotherhood militias are tearing down election posters,” Saad Kheir Allah, a Popular Coalition candidate in Alexandria, told al-Shorouk newspaper. “I completely oppose starting elections by flexing our muscles through the use of hired thugs.”

Some activists say the battle over street publicity is fed by middle-men who take cash to put up and defend the posters from sabotage. Using hired hands, known as “baltagia” or thugs, was common in Mubarak’s era to help secure seats.

“It’s very difficult for new parties like us that don’t have the old relationships and the money to fund the placement of posters in the best spots,” said Soliman of the Justice Party.

Secular liberals are using social media to expose what they say is private bigotry behind the tolerant public faces of Islamist candidates.

“No to Brotherhood Rule inEgypt”

A Facebook page called “No to Brotherhood Rule in Egypt” with more than 60,000 followers carried a list of reasons why voters should boycott the movement.

One read: “Why no to Brotherhood rule? Because they are Machiavellian and are ready to strike a deal with Satan himself to achieve their goals.”

Despite a ban on using religious slogans, the Brotherhood is using the motto “Islam is the Solution” though not on official posters for its Freedom and Justice party.

But such appeals to religion, even in Egypt where many women wear the Islamic veil, is no guarantee of support.

Nadia Ahmed Abdul Hamid, 45, a cleaner who wears a veil to cover her hair, said she was hemmed in while leaving a mosque last week by Islamists handing out leaflets saying women must stop wearing trousers and should not work unsocial hours.

“I don’t want the Brotherhood,” said Abdul Hamid. “I don’t trust them.”

They circulated a leaflet by Nour campaign staff that advertised a female candidate but showed her husband’s face. Another showed the candidate, but she was unrecognizable behind a full black veil.