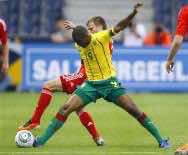 Cameroon’s players have gone on strike over alleged unpaid appearances fees and are refusing to play a scheduled friendly international in Algeria on Tuesday.

The match has had to be called off.

“This postponement is as a result of an internal administrative problem in the Cameroon national team,” the Algerian Football Federation said in a brief statement.

A statement from Cameroon’s players said they had not received money promised for their appearance in a four-nation tournament in Morocco at the weekend, where they played on Friday against Sudan and on Sunday against the host nation.

“We have decided not to make the trip to Algiers and call on the authorities in Cameroon to keep to their agreements,” a statement signed by the players and published on the www.camfoot.com website said.