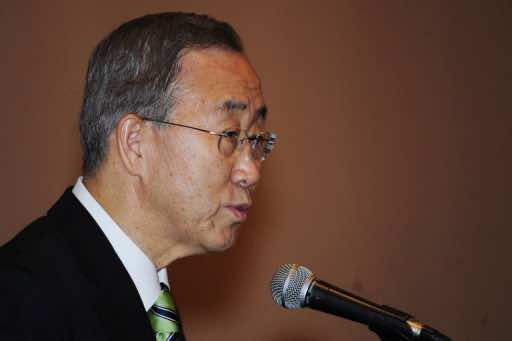 Ban told reporters in the Bangladeshi capital that Syrian President Bashar al-Assad must implement an agreement he made with the Arab League in an effort to find a peaceful resolution to the eight-month long uprising.

“It is crucially important now that President Assad immediately stop killing his own people,” Ban said.

Ban’s statements came after more than 70 people died in one of the deadliest days of Syria’s eight-month uprising on Tuesday.

“I have been continuously discussing this matter with League of Arab states,” Ban said.

He asked the Arab states to exercise their “leadership” in resolving the crisis “as soon as possible”.

“This is a source of great concern not only for the region but for the whole international community, for democracy and humanity,” he said.

Jordan’s King Abdullah II on Monday became the first Arab leader to openly call for Assad to step down, two days after the Arab League took the rare move of suspending Syrian membership of the 22-nation bloc and imposing sanctions.

Neighbouring Turkey, a former close Syrian ally that has been one of the most outspoken champions of reform, prepared to hold talks in Morocco with Arab leaders Wednesday that are expected to be dominated by the bloodshed.

On the penultimate day of his four-day Bangladesh tour, the UN Secretary General also praised impoverished Bangladesh as a “model” of development.

But he said it was important that the country’s political leaders work for “credible” elections in 2014.

Bangladesh’s main opposition party has threatened to boycott the elections after the government scrapped a system under which the past four general elections were conducted by a neutral caretaker government.

Although non-party caretakers have delivered free and fair polls, it paved the way for military takeover in 2007 — a reason cited by the government for cancelling the system.

“It is particularly important that the next elections in 2014 are conducted in a transparent and credible way. In this regard, I expect the political leaders to look beyond political lines,” Ban said.

Ban met Prime Minister Sheikh Hasina and her bitter rival Khaleda Zia during his visit and urged dialogue among the parties to resolve the differences ahead of the next polls.

“I sincerely hope that all these differences of opinion are resolved harmoniously through a dialogue between and among the political leaders,” he said.