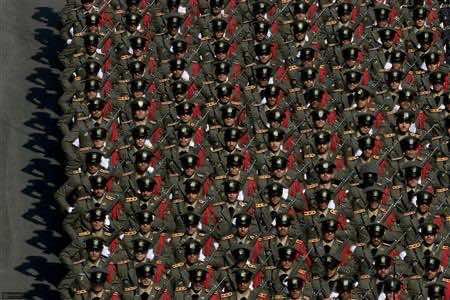 Assassinations of nuclear scientists, a sophisticated cyber-attack, and now, last weekend, a mysterious blast at a munitions base that has killed the “godfather” of Iran’s ballistic missile program.

The explosion at the Bid Ganeh base was so powerful, it killed 17 Revolutionary Guards Corps soldiers and rattled windows in Tehran several miles away.

Iran says it was an accident, but few who follow events there are convinced.

The recent talk may be all about a future, desperate last-ditch military strike by Israel to destroy Iran’s suspected nuclear weapons program, but to all appearances, a covert “black ops” campaign to disrupt it has already been under way for some time.

At least three Iranian nuclear scientists have been killed in the past two years, and last winter, a computer virus codenamed Stuxnet was introduced into Iran’s nuclear enrichment centrifuges, causing havoc and setting back the program by several months.

I don’t know the extent of the explosion but, it would be desirable if they multiplied”

Mahan Abedin, editor of Terrorism Monitor published by the Jamestown Foundation, says: “The assassination of Iran’s scientists and the introduction of the Stuxnet computer virus last year constitute state terrorism.”

No-one, of course, is claiming responsibility for these actions, but US intelligence is widely believed to have had a hand in developing the Stuxnet virus, while Iranian officials have previously accused Israel of being behind the assassinations.

Of all the countries in the region to feel threatened by Iran, Israel is most alarmed by the Iranian nuclear program.

Plenty of other countries share Israel’s concerns about Iran’s growing military power, though they tend not to express it publicly.

On Tuesday, a Gulf Arab official who asked not to be named told the BBC: “We are very worried about Iran, it’s getting to the point where it’s a very dangerous scenario. 2012 is a crucial year when decisions are going to have to be taken”.

In a cable leaked by Wikileaks, it emerged Saudi Arabia’s King Abdullah had urged the US to deal decisively with Iran and stop its suspected nuclear weapons program.

The Saudi monarch used the poetic language of the Nejdi desert, urging Washington to “cut off the head of the snake”.

The UAE, involved in a long-running territorial dispute with Iran over three Gulf islands, has also been quietly urging the West to contain Iran and stop it acquiring a nuclear bomb.

Bahrain’s Sunni monarchy also sees Iran as essentially a hostile neighbour bent on stirring up Bahrain’s Shia majority and encouraging it to press for an Islamic republic.

Last week, the Bahrain government announced it had uncovered a terrorist plot to blow up the causeway linking it to Saudi Arabia, adding that the suspects had links to Iran.

But at a forum on Iran hosted in London on Monday by the International Institute of Strategic Studies (IISS), many voiced the view that Iran was hell-bent on acquiring the nuclear bomb and there was very little that was going to deflect it.

Referring to the steady ratcheting up of Western sanctions on Iran, Sir Richard Dalton, the UK’s ambassador to Tehran from 2002-06, said: “There is no sanctions policy out there that will change Iran’s behavior.”

However he questioned the benefit of the apparent covert action against Iran, saying “whoever is behind these actions needs to make the case for them publicly, and I’m not sure at all that that case holds water.”

Mr Abedin said: “No tool, no pressure, not even the toughest of sanctions, nor even military conflict will work [to steer Iran away from becoming a nuclear weapons power].”

Mark Fitzpatrick, the IISS resident expert on Iran’s nuclear program, is in no doubt which direction Iran is heading.

He told the forum: “I think Iran probably already has a latent nuclear weapons capability.”