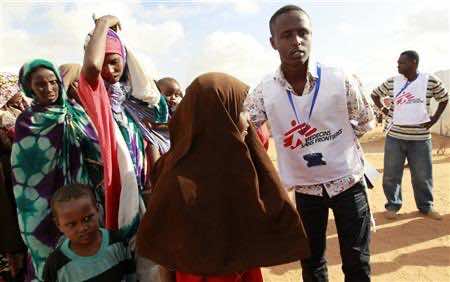 Cholera has broken out in the world’s largest refugee camp in Kenya, home to nearly 500,000 Somali refugees, the United Nations said on Tuesday.

Insecurity also continues to hamper aid efforts following the kidnapping of Western aid workers from the sprawling Dadaab complex of five camps, where 100 additional Kenyan police have been deployed in the past month, it said.

“There are now 60 cholera cases in the camps, including 10 laboratory-confirmed cases and one refugee death,” Andrej Mahecic, spokesman of the U.N. High Commissioner for Refugees (UNHCR), told a news briefing.

The outbreak is believed to have started among newly arrived refugees from Somalia, where the disease is endemic, who may also have contracted it en route by drinking unsafe water from areas flooded by heavy rains, he said.

Cholera is an acute intestinal infection transmitted in contaminated water that causes watery diarrhoea and severe dehydration and can kill within hours if not treated.

The UNHCR and other aid agencies have set up cholera treatment centres in the camp for severe cases and are promoting safe hygiene practices, Mahecic said. Most cases can be managed by giving oral rehydration solutions.

Kenya mounted an air and ground offensive against al Qaeda-linked al Shabaab, Somalia’s Islamist rebels, last month after a string of kidnappings and cross-border raids it blamed on the group.

Ten days ago, a U.N. aid convoy struck a landmine that failed to detonate in the Dadaab refugee camp, where at least 463,000 Somali refugees are living after fleeing violence and famine in their anarchic homeland.

“We are talking about a very volatile situation along the border with the situation in Somalia not getting any better,” Mahecic said.

The UNHCR has already cut back its aid operations to essential services, namely distribution of food, water and health care, while suspending education and other activities.

“We would like to resume the full services as soon as possible. There are discussions underway,” Mahecic said.

“But clearly the insecurity is something that needs to be addressed. We welcome the arrival of the additional contingent of the Kenyan police which should improve the situation and allow better freedom of movement and better security for the aid workers in the camps,” he added.

In all, some 220 Kenyan police are now deployed in Dadaab, which consists of five camps spread across 50 square kilometers, according to the UNHCR spokesman.

“They have arrived in extremely poor health, with many families losing children to malnutrition en route or after arrival in Ethiopia,” he said.