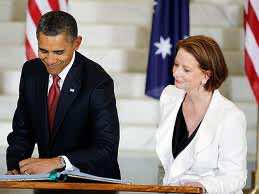 US President Barack Obama is to strengthen military ties with Australia by updating a 60-year old security alliance as part of his two-day visit.

Obama, making his first visit to the country since his election in 2008, was greeted by Julia Gillard, the Australian prime minister, as Air Force One landed in Canberra, the capital, on Wednesday.

After holding talks with Gillard, Obama is expected to address Australia’s parliament on Thursday – where he will announce plans for thousands of US maritime forces to train and do more joint exercises with the Australian military on the country’s northern coast.

Obama has already announce that the US was “stepping up its commitment to the entire Asia-Pacific” by announcing there will be a deployment of about 250 US marines who will arrive next year.

The nations’ military agreement will not include any permanent US basing, but an Obama administration official told the Reuters news agency that it was a stepping stone to a more stable presence in Australia, which offers closer access to the South China Sea than USbases in Japan and South Korea.

The visit is being seen as a push by Washington to stand up for its interests and allies in the Asia-Pacific region as a counterbalance to China.

“The main message that I’ve said, not only publicly but also privately to China, is that with their rise comes increased responsibility.

“It is important for them to play by the rules of the road.”

Al Jazeera’s Andrew Thomas reporting from Canberra says: “The base won’t be an American base, but using an Australian base is pretty much the same thing, this annoucement is being read by many as fronting up to China.”

Obama and Gillard will take part in a joint press conference before addressing parliament in what aides say will be the “anchor speech” of his tour.

In Canberra, Obama and Gillard are expected to discuss a range of US strategic interests in Asia, including regional concerns about human and drug trafficking, piracy, violent extremism as well as the future of the Korean peninsula.

After Australia, Obama heads toIndonesiato join Saturday’s East Asia Summit, a 16-nation grouping including China that the US and Russia are joining for the first time.

Gillard has insisted that strengthening the US-Australia alliance was not a threat to China, whose voracious demand for Australian natural resources has made it the nation’s biggest trading partner.

“I think it is well and truly possible for us, in this growing region of the world, to have an ally in the United States and to have deep friendships in our region, including with China,” said Gillard.

The US and Australia have a long history of military alliance, with the two countries’ forces fighting together in World War II, Korea, Vietnam and, more recently, in Iraq and Afghanistan, while US intelligence services are believed to operate a listening post in the Australian outback.

Obama had twice cancelled visits to Australia in the past – in March 2010 as he worked to pass healthcare reform legislation and then in June the same year amid the Gulf of Mexicooil spill.

The US Secretary of State Hillary Clinton is also in the region as she’s meeting with her Philippine counterpart Albert del Rosario on Wednesday during a visit aimed at reinforcing the security partnership between the two countries.

Clinton’s visit belatedly commemorates the 60th anniversary of the Mutual Defence Treaty, which states that both nations would support each other if either the Philippines or the US were to be attacked by an external party.

US authorities said the US is seeking to diversify its engagement in the Philippines, focusing on boosting maritime capabilities.