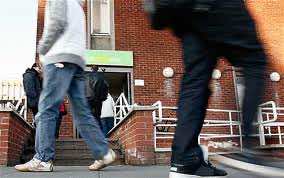 Britain’s jobless rate hit a 15-year high of 8.3 percent in the three months to September, when youth unemployment surged past one million people for the first time, official data showed on Wednesday.

“The unemployment rate was 8.3 percent of the economically active population, up 0.4 (percentage points) on the quarter,” the Office for National Statistics (ONS) said in a statement.

The rate was the highest level since 1996 and compared with 8.1 percent in the three months to August.

Youth unemployment — or the number of unemployed aged 18-24 — jumped 67,000 to 1.02 million in the three months to September. That was the highest amount since comparable records began 19 years ago.

The number of people claiming jobseeker’s allowance increased for the eighth month in a row to 1.6 million in October.