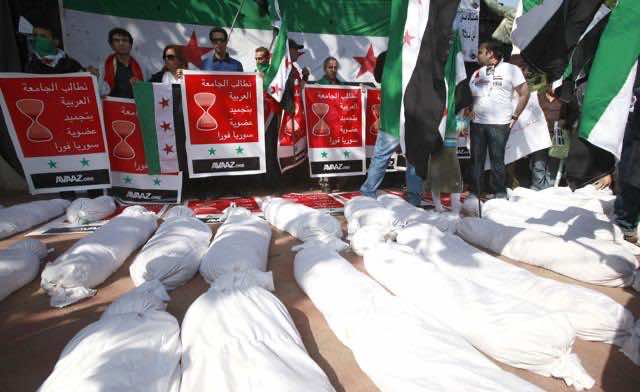 Syrian army defectors attacked an intelligence complex on the edge of Damascus early on Wednesday, as Arab nations were set to meet in Morocco later in the day to tighten the noose around increasingly isolated Syria, which will boycott the meeting.

The early morning attack is the first reported assault on a major security facility in the eight-month uprising against President Bashar al-Assad, activists said, according to Reuters.

Members of the Free Syrian Army fired shoulder-mounted rockets and machineguns at a large Air Force Intelligence complex situated on the northern edge of the capital on the Damascus-Aleppo highway at about 2:30 a.m. (0030 GMT). A gunfight ensued and helicopters circled the area, the sources said.

A gunfight ensued and helicopters circled the area, the sources said. The attack appeared to mark an escalation in armed confrontations between government and opposition forces instead of clashes involving street protesters.

“I heard several explosions, the sound of machinegun fire being exchanged,” said a resident of the suburb of Harasta, who declined to be named.

There was no immediate report of casualties and the area where the fighting occurred remained inaccessible, the sources said.

Together with Military Intelligence, Air Force Intelligence is in charge of preventing dissent within the army. The two divisions have been instrumental in a crackdown on the uprising against Assad, which the United Nations says has killed 3,500 people.

Arabs to meet in Rabat

Arab nations, meanwhile, were scheduled to meet in the Moroccan capital to tighten the noose around increasingly isolated Syria after Turkey warned its onetime ally against feeding “on the blood of the innocent.”

Syria will boycott the meeting, as regional states stepped up efforts to isolate President Bashar al-Assad for refusing to end a crackdown on eight months of protests.

The meeting of Arab foreign ministers in Rabat comes four days after they decided to discipline Syria for pursuing the crackdown instead of implementing an Arab peace initiative.

The Arab League’s decision to suspend Syria is only the third suspension of a member in the pan-Arab body’s history.

The League has stopped short of calling for Assad’s departure or proposing any Libya-style military intervention.

“In light of statements by officials in Morocco, Syria has decided not to participate in the Arab meeting in Rabat,” the Syrian news agency said, without giving details.

Turkeysays no future “on the blood of the innocent”

“A future cannot be built on the blood of the innocent, otherwise history will remember those leaders as the ones who feed on blood. And you Assad, you are now coming closer to opening that page of history,” Erdogan said, according to AFP.

Turkey said it was halting joint oil exploration with Syria.

The United States urged Arab leaders to step up pressure on Damascus and send Assad a message Wednesday “that he needs to allow for a democratic transition to take place and to end the violence against his own people,” said State Department spokesman Mark Toner.

Russia, one of Syria’s last few foreign friends, hosted talks with the Syrian National Council and urged it to hold a dialogue with Assad’s government. The opposition group responded by pressing Moscow to join calls for the Syrian leader to quit.

Russia joined China last month to block a U.N. Security Council resolution that would have condemned Assad’s crackdown, and has accused the West of discouraging dialogue in Syria.

On Monday, Jordan’s King Abdullah II urged Assad to step down over the repression — which the UN says has killed 3,500 since March — becoming the first Arab head of state to call for the Syrian president’s resignation.

A Saudi prince said Assad’s “lack of response” to efforts to end the violence has made his departure inevitable, predicting that opposition to him will mount.

“I think it is inevitable that he will have to step down in one form or another,” Prince Turki al-Faisal, the former chief of Saudi intelligence, said in Washington.

Wednesday’s meeting will take place on the sidelines of an Arab-Turkish cooperation forum attended by Turkish Foreign Minister Ahmet Davutoglu.

Turkey, a former Damascus ally that has been one of the most outspoken champions of reform, has threatened to cut power exports to Syria, AFP reported.

Ankara has been gradually distancing itself from its neighbor, stopping just short of recognizing the Syrian National Council, an exiled opposition umbrella group founded in Turkey, as the nation’s legitimate authority.

Assad has few friends left in the Arab world — only Syria, Lebanon and Yemen did not support its suspension from the league. Its main allies internationally are China, Russia and Iran.

The six oil-rich Gulf Arab states said Wednesday’s planned meeting in Rabat meant there was no reason to agree to Syria’s request for an emergency Arab summit to review the suspension.

Some observers argue that Assad’s regime is on its last legs and its call for a summit was nothing but a stalling tactic.

The Arab League said Monday it planned to send 500 observers to Syria but the organization’s chief Nabil al-Arabi said it needed guarantees from Damascus.

Demonstrators protesting against President Bashar al-Assad gather during a march through the streets of Kafranbel near Idlb. (Reuters)

Apart from releasing 1,180 prisoners Tuesday it said were “implicated” in the violent uprisings, Syriahas failed to implement an Arab roadmap agreed on Nov. 2.

The plan called for the release of detainees, the withdrawal of the army from urban areas, free movement for observers and media, and negotiations with the opposition.

Instead, human rights groups say, the regime has intensified its crackdown.

Monday was one of the bloodiest days since the start of the uprising, with more than 70 people killed, including several suspected army deserters.

Syrian forces killed at least six civilians on Tuesday, shooting from roadblocks in the northwestern province of Idlib and in raids on the central city of Homs and its environs, activists told Reuters. Several deaths also were reported in fighting between army defectors and loyalist forces on both sides.

The Syrian Observatory for Human Rights said the bodies of three young activists who were killed in custody were delivered to their families on Tuesday.

Syrian authorities have banned most independent media. They blame the unrest on “armed terrorist gangs” and foreign-backed militants whom they say have killed 1,100 soldiers and police. The United Nations say the crackdown has killed 3,500 people.