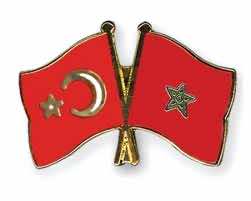 Morocco and Turkey voiced on Tuesday willingness to promote political and strategic dialogue and set up an ad hoc committee to this end.

The two countries are strongly willing to further boost bilateral cooperation  for the good of their brotherly peoples who are bound by historical ties and common destiny, said Fassi Fihri who highlighted the convergence of views between Morocco and Turkey.

The two parties also stressed the need to cooperate together to help promote development and stability in Africa, said the Moroccan official.

Fassi Fihri said that the meeting was an opportunity to examine the situation in Syria, Palestine and the Middle East. In this respect, he emphasized the need for the establishment of an independent fully viable Palestinian state with Al-Quds as its capital.

The Moroccan Foreign Minister also said that the peoples should be allowed to express their aspirations and ambitions to a dignified life and democracy.

Davutoglu, for his part, described the historical bilateral relations with Morocco as excellent, voicing hope to see cooperation ties further boosted notably at the levels of economy, tourism, security and trade.

The two countries share common interests and same views, added the Turkish official, commending Morocco’s relations with Africa and the EU.
He also acclaimed the reforms undertaken in Morocco under the leadership of HM King Mohammed VI.

On the sidelines of this meeting, Morocco and Turkey signed four cooperation agreements in the areas of science, technology, mutual recognition of driving licenses, fisheries and aquaculture.

A memorandum of understanding was also inked between the Turkish standards institute and the Moroccan normalization institute (Institut marocain de normalisation).

Davutoglu is in Morocco to take part in the 4th forum of Arab-Turkish cooperation, which, since its setting up in 2007, aims at reinforcing political, security, economic, cultural, educational, scientific and social cooperation between Arab countries and Turkey.