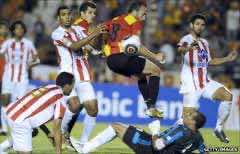 The Tunisian authorities, at the highest level, granted “the utmost importance” to the incidents that took place after the end of the CAF Champions League final between Casablanca’s Wydad and Tunisia’s Esperance, says a statement of Tunisia’s Embassy in Rabat on Wednesday.

The Tunisian Prime Minister, who received the Moroccan ambassador to Tunisia, “gave his instructions to open an inquiry into the circumstances of these incidents to take all necessary measures in this regard,” adds the statement.

The same source affirms that “what happened does not reflect the spirit of discipline, healthy competition and fair-play” of the match, regretting the fact that some media “magnified the events by publishing large headlines and unfounded information, like the announcement of the death of a supporter or the beginnings of a diplomatic crisis between Tunisia and Morocco.”

“The Tunisian authorities continue coordination with authorities of brotherly country Morocco in a spirit of confidence and responsibility” and “the solid brotherly ties between the two peoples, as well as long-standing and exemplary relations between the two countries cannot be affected by such incidents, which remain isolated and individual,” the statement says.
Algerian to pay ransom of Spanish and Italian hostages abducted in Tindouf