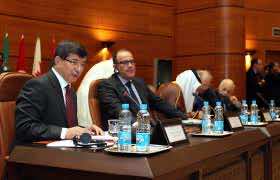 Davutoglu told the 4th session of the Arab-Turkish cooperation Forum, held in Rabat, that Turkey commended the position taken recently by the Arab League regarding the situation in this country, regretting that Damascus has not respected its commitments towards the Syrian people and the Arab League.

He added that the Syrian regime should meet the aspirations of the people and positively respond to the Arab League’s message in this issue.

The Turkish Minister called on the countries participating in the Forum to work closely within various international bodies to end the bloodshed, achieve peace and ensure Syria’s stability.

Davutoglu also commended the major reforms undertaken by Morocco, which, he said, represents a model for the region’s countries.

The opening session of the Forum, was marked by a message from HM King Mohammed VI to the participants, read by Moroccan Foreign Minister Taib Fassi Fihri.

Created in November 2007 in Istanbul, the Forum aims to cement cooperation between Arab countries and Turkey in the political and security, economic, cultural, educational and scientific, social areas as well as in the dialogue of civilizations.