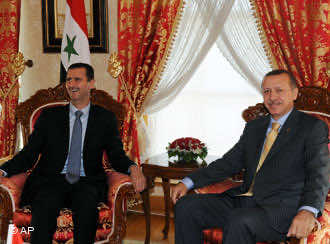 Relations between former allies Turkey and Syria have deteriorated to such an extent over the Syrian government’s crackdown that the threat of a military exchange is becoming a distinct possibility.

Turkey this week suspended its joint oil exploration projects with Damascus and threatened to cut off electricity supplies to its neighbor in response to the continued violent suppression of Syria’s popular uprising by the regime of President Bashar al-Assad. Its apparent refusal to bow to pressure from the Arab League to adhere to the terms of a peace agreement brokered earlier this month has also tested the limits of Turkey’s patience.

While these sanctions marked the strongest rebuke yet by the government of Turkish Prime Minister Recep Tayipp Erdogan, worse was to come when it was announced that Turkey was considering the possibility of imposing a buffer zone on the Syrian side of the border the two nations share to provide a sanctuary for refugees fleeing the onslaught.

Such action, some observers believe, implies a commitment to direct military action by Turkey and the catalyst for a seemingly inevitable conflagration should the Syrian regime fail to halt the spiraling violence.

“Syria cannot withstand an external aggression while it struggles to end the internal conflict,” Kristian Ulrichsen, a Middle East and North Africa expert at the London School of Economics, told Deutsche Welle.

Human rights groups have reported increasing numbers of army defections. According to Ulrichsen, this phenomenon seemed to suggest that the regime was losing its grasp on this vital function of state power. However, it was still unclear whether a tipping-point had yet been reached, he said.

“Turkey might attempt to carve out a safe haven in northern Syria for civilians and defecting military personnel,” Ulrichsen said. “Were this to happen, it is difficult to see how Syria could resist this.”

Erdogan, who has been promoting Turkey’s credentials as a leading agent for change in the Islamic World since the Arab Spring began earlier this year, delivered some of his strongest rhetoric yet after a number of Turkish consulates were attacked by pro-Assad protestors across Syria last weekend.

Ratcheting up the pressure on the Syrian regime, Erdogan announced that he no longer had any confidence in the Assad government, warning that Syria was now “on a knife-edge” and that the regime was looking down “a road of no return, one which leads to the edge of the abyss.”

“No regime can survive by killing or jailing,” Erdogan said. “Those who fire on their own people will go down in history as leaders who feed on blood.”

While the destabilizing violence on Turkey’s southern border and the pressure which comes from the consequent refugee situation have certainly contributed to the souring of relations in recent months, regional experts believe there are other factors behind Turkey’s U-turn in its dealings with Syria.

“Erdogan is disappointed and probably embarrassed that his personal relationship and trust for Assad couldn’t be used to reach a negotiated transition in Syria, and is also doubtless frustrated that in the end Turkey had limited power to facilitate change in Damascus,” Hugh Pope, director of the Turkey/Cyprus Project at the International Crisis Group think-tank, told Deutsche Welle.

Pope said the burning of the Turkish flag by Syrian demonstrators, as well as the warming up of Syrian ties to Turkish Kurd insurgents in Turkey were also very important factors in changing Turkish attitudes.

All of this has added to the growing consensus that Turkey has run out of patience with Syria.

Turkish Foreign Minister Ahmet Davutoglu told a press conference in the Moroccan capital of Rabat earlier this week that Syria had rejected its last chance to avoid sanctions by stopping its violent repression of anti-government protests. He said that Turkey would stand by the Syrian people in what he called their “rightful struggle” against the Assad government.

“The Syrian regime does not want to listen to the demands of its people,” Davutoglu said. “Unfortunately, it still shoots its own people. We have given a last opportunity to the Syrian regime but they didn’t want to seize it. Now we cannot afford to sit idle.”

With the Arab World in flux, Turkey under Erdogan has moved to position itself at the forefront of a new order by promoting itself as a moderate, secular example of how an Islamic country can succeed under a democratic system of government. Erdogan recently completed an “Arab Spring Tour,” pitching Turkey’s democratic model to countries such as Egypt, Libya and Tunisia.

More recently, the Turkish prime minister has gone further than most by hosting Syrian opposition groups in Istanbul and overseeing the formation of the Syrian National Council at a meeting where the proposal of a buffer zone was first discussed in a bid to take a lead in dealing with the crisis.

Despite Erdogan’s regional ambitions, the Turks are unlikely to take a unilateral decision. Turkey would need approval from its neighbors, which looks more likely following the Arab League’s suspension of Syria from its ranks, before creating such a zone.

“The protection of civilians is certainly very important,” a foreign policy adviser to the Turkish president, Abdullah Gul, said in a statement on Turkish television. “But what matters is an international resolution on the issue. It seems out of the question for us to do that on our own.”

“This may make the Arab League less concerned about the possibility of intervention in Syria, particularly were it to be led by Turkey,” he said.

Turkey would most unlikely take any direct action in Syria without full sanction from the international community, Pope said.

“It is unlikely that anything less than a strong UN Security Council resolution will enable Turkey to play any role, and I doubt the Arab League will ask Turkey to lead anything,” he said.

Any conflict with Syria could also have repercussions for western nations which have so far been reluctant to do more than verbally condemn the actions of the Assad regime.

Questions for NATO should war begin

Turkey, as a NATO member, is covered by the mutual defense agreement which states under Article 5 of the organization’s charter that when member countries face an external threat, they can rely on assistance from their NATO partners. While it may not be invoked if Turkey instigates a conflict, should Syria respond, it could put pressure on a NATO leadership which sees Turkey as an important ally as well as a bridge to the Islamic World and the Middle East.

“Technically NATO would be obliged to help, and that would be problematic as the NATO intervention in Libya far exceeded the terms of its UN mandate and caused disquiet among many sections of the international community,” said Ulrichsen.

“I suspect that NATO would try to find a way of ensuring that any action was taken by Turkey as a nation-state rather than a member of NATO, although were Turkey to experience serious reversals or blowback that situation might become harder to sustain.”

Pope, however, said he believes that the situation is unlikely to develop into one in which NATO is forced to act on Turkey’s behalf. “NATO is very unlikely to get involved in Syria, unless there is a Syrian attack on Turkey, which is also very unlikely,” he said.