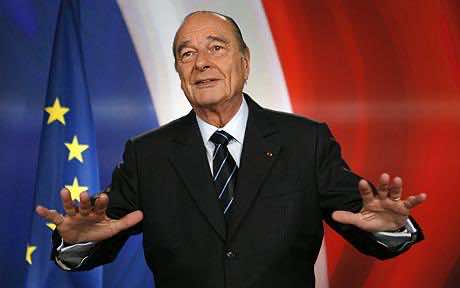 Paris prosecutors said Wednesday they had called off a probe into claims that French former president Jacques Chirac  and other politicians accepted money from African regimes in order to fund political campaigns, citing a lack of evidence.

Paris prosecutors said Wednesday that due to lack of evidence they called off a probe into claims that French ex-president Jacques Chirac and other politicians took money from African states.

Lawyer Robert Bourgi, a long-time unofficial pointman between France’s Elysee palace and regimes in former African colonies, in September made a raft of allegations claiming former African heads of state gave bags of cash to fund presidential campaigns in France.

But the Paris prosecutors’ office said Wednesday that they were unable to find any evidence to support the claims and had ended their preliminary inquiry.

Bourgi claimed as much as 20 million dollars was given to Chirac and his then prime minister Dominique de Villepin, who is planning to run for president in next year’s elections.

All three leaders have denied these claims and have said they will file defamation complaints against Bourgi.