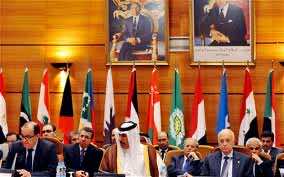 That came as a raid by army defectors on a military base highlighted the scale of the challenge to Assad at home, prompting the United States to warn that violence by the opposition is playing into his regime’s hands.

Despite Syrian promises to the contrary, the embassies of Morocco and the United Arab Emirates in Damascus were attacked by pro-Assad crowds on Wednesday.

With the foreign ministers in Rabat saying their patience had run out, the Arab League gave the Assad regime three days to halt violence or face economic sanctions, Qatar’s prime minister said.

The 22-member League is “giving the Syrian government three days to stop the bloody repression” of its civilian population, Sheikh Hamad bin Jassem al-Thani told a news conference after a meeting of member states in Rabat.

“But if Damascus does not agree to co-operate with the League, sanctions will be adopted against Syria,” he said, adding that the Arab states had “almost reached the end of the line” with Damascus.

“I don’t want to speak about last chances so (the regime) doesn’t think it is being given an ultimatum but we are almost at the end of the line,” he said.

Syria was suspended by the League at the weekend, and refused to turn up at the meeting, which was also attended by Turkey, its northern neighbour.

In a statement after what was labelled the Turkish-Arab co-operation forum, ministers declared they were “against all foreign intervention” but said it was time for urgent measures.

“The forum declares that it is necessary to stop the bloodshed and to spare Syrian citizens from new acts of violence and killing, and demands that urgent measures are taken to ensure the protection of civilians,” a statement said.

“Ministers also stressed the importance of Syria’s stability and unity and the need to find a resolution to the crisis without any foreign intervention,” it added.

In Washington, State Department spokesman Mark Toner said it was “not surprising” that the opposition is resorting to violence.

“We don’t condone it in any way, shape or form but . . . it’s the brutal tactics of Assad and his regime in dealing with what began as a non-violent movement (that) is now taking Syria down a very dangerous path,” he said.

“We think that this kind of violence . . . it really plays into Assad’s and his regime’s hands when this becomes violent.”

Arab League chief Nabil al-Arabi said “everything must be done to stop the ongoing bloodshed in Syria.”

He said he hoped Arab moves to send observers to Syria would bear fruit within days, but reiterated that no observers would be sent before a clear agreement is signed.

The pan-Arab body had agreed to send 500 members of human rights groups, media representatives and military observers to Syria, which said it would welcome them to see the situation on the ground and help implement the peace deal.

As the ministers met, pro-Assad protesters attacked the Moroccan and UAE embassies in Damascus, officials said.

Ambassador Mohammed Khassasi told AFP that between 100 and 150 demonstrators had pelted the Moroccan embassy with eggs and stones, and stripped it of its flag.

“The UAE condemns the attack against its embassy in Damascus and the Syrian government bares responsibility for the safety and protection of the chancery and the security of its staff,” said the foreign ministry’s Jumaa al-Junaibi, quoted by state media.

France recalled its ambassador to Syria on Wednesday while the U.S. envoy, abruptly withdrawn last month because of security threats, is supposed to return to Syria in “days to weeks,” Washington has said.

Turkey, once a close ally of Syria, has become increasingly outspoken in its criticism of Assad’s regime since the uprising began.

“The cost for the Syrian administration of not fulfilling the promises it made to the Arab League is its isolation in the Arab world as well,” Ahmet Davutoglu told his Arab counterparts.

“It is not possible for any administration to win the fight against its own people,” he added.

The unprecedented movement against Assad’s rule has been spearheaded by peaceful demonstrators but, in recent months, deserters have organized themselves into a Free Syrian Army that has inflicted growing losses on the regular armed forces.

Wednesday’s attack on an intelligence base near Damascus was one of the FSA’s most spectacular operations to date.

“The Free Army struck with rockets and RPGs (rocket-propelled grenades) the headquarters of air force intelligence which is located at the entrance of Damascus,” said the Local Co-ordination Committees, an activist network.

There was no immediate word on casualties.

Meanwhile, the FSA announced it was forming a temporary military council to spearhead the fight to oust Assad’s regime.

The council aims to “bring down the current regime, protect Syrian civilians from its oppression, protect private and public property and prevent chaos and acts of revenge when it falls,” it said in a statement received in Nicosia.

On the ground, civilians and army defectors were killed in various parts of the country, while a number of soldiers were also killed and wounded.