Rabat, November 16, 2011 (MAP)Algerian Foreign Minister Mourad Medelci said, on Wednesday in Rabat, that he is “satisfied” with the process of consolidating relations between Morocco and Algeria. 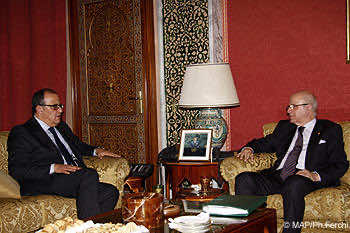 Algerian Foreign Minister Mourad Medelci said, on Wednesday in Rabat, that he is “satisfied” with the process of consolidating relations between Morocco and Algeria.

“We developed road map months ago through meetings between ministers from the two countries,” said the Algerian official following a meeting with Moroccan peer Taib Fassi  Fihri.

“These meeting started to yield concrete effects,” added Medelci following the meeting that was held on the sidelines of the extraordinary meeting of the Arab League’s Council to examine the situation in Syria.

This strengthening of bilateral relations “will enable us to meet frequently and to exchange information on our own challenges and concerns in order to better understand eachother,” he went on to say.

The Algerian official said that he is “ convinced that very shortly we will find the path that will lead something that we all hope for, something that transcends bilateral relations, namely our ambition, we the Maghrebans, to build the Maghreb.”

Medelci, on the other hand, voiced hope that the Moroccan-Algerian brotherhood as well as the ties and interests and the common heritage between the two countries will be recalled by the press of the two neighbor countries so that it endeavors to project “another image” of each other.

By moving in this direction, he noted, “we will give more chances to our bilateral relations.”

The Algerian Minister said that he examined with his Moroccan counterpart bilateral cooperation, including at the information level.