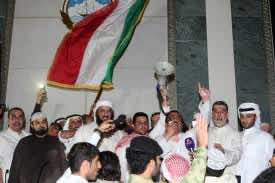 Thousands of Kuwaitis stormed parliament on Wednesday after police and elite forces beat up protesters marching on the prime minister’s home to demand he resign, an opposition MP said.

“Now, we have entered the house of the people,” said Mussallam al-Barrak, who led the protest along with several other lawmakers and youth activists also calling for the dissolution of parliament over alleged corruption.

The demonstrators broke open parliament’s gates and entered the main chamber, where they sang the national anthem and then left after a few minutes.

The police had used batons to prevent protesters from marching to the residence of Prime Minister Sheikh Nasser Mohammad al-Ahmad al-Sabah, a senior member of the ruling family, after staging a rally outside parliament.

Pro-government lawmakers managed to vote down a request for the questioning, but opposition groups filed another motion to force another debate later this month.

Kuwait’s key affairs are run by the ruling Sabah family, but it has one of the region’s most politically active parliaments.

Witnesses said at least five demonstrators were injured and treated on the site.

Some activists said they will continue to camp outside parliament until the premier is sacked.

Chanting “the people want to remove the prime minister,” the protesters started to march to the nearby premier’s residence when police blocked their way.

This was the first political violence in the oil-rich Gulf state since December, when elite forces beat up protesters and MPs at a public rally, though activists have been holding protests since March.

Tension has been building in Kuwait over the past three months after it was alleged that about 16 MPs in the 50-member parliament received about $350 million (259 million euros) in bribes.

The opposition has been leading a campaign to oust the premier, whom they accuse of failing to run the wealthy nation and fight corruption, which has become wide-spread.

Earlier on Wednesday, about 20 opposition lawmakers boycotted a parliamentary session, a day after the government and its supporters succeeded in rejecting a bid by the opposition to quiz the premier over allegations of corruption.

Kuwait has not been hit by major pro-reform demonstrations inspired by Arab uprisings, but the tiny Gulf nation stands out in the region because of its hardball political atmosphere. Kuwait’s parliament has the most powers of any elected body in the Gulf, and opposition lawmakers openly criticize the ruling family.

In January, Kuwait’s emir, Sheik Sabah al-Ahmed al-Sabah, ordered 1,000 dinar ($3,559) grants and free food coupons for every Kuwaiti. Those handouts have been since dwarfed by other Gulf rulers trying to use their riches to dampen calls for political reform. Saudi Arabia’s King Abdullah has pledged about $93 billion for more government sector jobs and services. Last month, Qatar announced pay and benefit hikes of 60 percent for public employees and up to 120 percent for some military officers.

Kuwaitis are used to a cradle-to-grave social security system that has increasingly become a burden on the government.