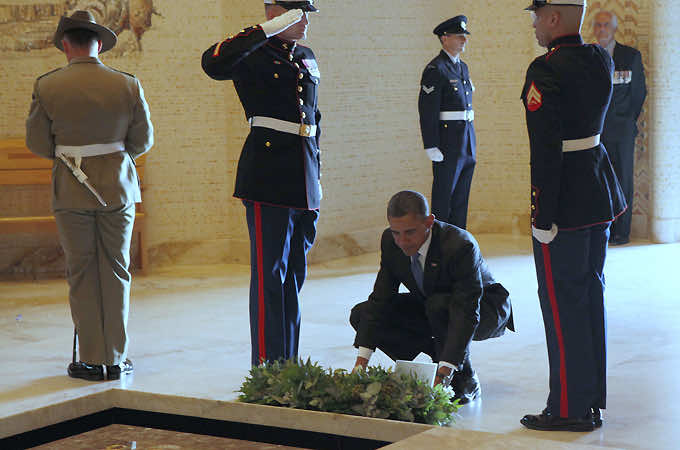 China has reacted angrily to remarks by Barack Obama signalling a significant shift in US policy vis-a-visAsia.

The US president has pledged not to let his country’s budget crisis compromise its strategic vision and military presence in the Asia-Pacific region.

His commitment came a day after the US said it would deploy up to 2,500 troops to northern Australia and strengthen air force co-operation, causing a strong reaction from China, whose rapid rise is reorienting Asia’s strategic balance.

In a message aimed both at a region he sees as vital to the US economic future and politicians at home, Obama told the Australian parliament on Thursday the Asia-Pacific was too vital to fall prey to US penny-pinching.

“As the United States puts our fiscal house in order, we are reducing our spending,” Obama said, cautioning that reductions in funding for the US military machine were inevitable after years of huge spending in Iraq and Afghanistan.

“Here is what this region must know. As we end today’s wars, I have directed my national security team to make our presence and missions in the Asia-Pacific a top priority.

“As a result, reductions inUS defence spending will not – I repeat, will not – come at the expense of the Asia-Pacific.”

“For the Chinese, the reaction is the sense that they’re being encircled,” she said, noting the existing US-Japan military relationship.

The People’s Daily, the Chinese newspaper that is the organ of the ruling Communist Party, was clear in its opposition to reinforced US-Australia security ties, she said..

“Australia surely cannot play China for a fool. It is impossible for China to remain detached no matter what Australia does to undermine its security,” the paper said.

Michael Raska, a defence analyst at the National University of Singapore, told Al Jazeera that China’s assertiveness is a reaction to the broader US strategy of re-engagement in the Asia-Pacific region.

“I’m not surprised that Beijing would be increasingly assertive. For over a decade, Beijing has been using its economic leverage to gain political advantage in the region,” he said.

The US is moving to strengthen ties with traditional allies, such as Australia, Japan and South Korea, as well as building powerhouses with emerging powers such India and Indonesia, in what is clearly a bid to preserve its ability to continue to be an actor in the region, Raska said.

“The bottom line is, in every major security issue in the Asia-Pacific region,China has a major imprint, and its military capabilities are increasingly upsetting US freedom in the region.”

During the speech, Obama addressed the sensitive issue of ties withChina, pressed for more reform in Myanmar and said North Korea would pay a heavy price for the proliferation of nuclear or other materials to states or individuals.

“The US will continue our effort to build a co-operative relationship with China,” Obama said on a tour which has exposed divisions between Washington and Beijing.

“All of our nations have a profound interest in the rise of a peaceful and prosperousChina- and that is why the US welcomes it,” he said.

“We will do this, even as we continue to speak candidly with Beijing about the importance of upholding international norms and respecting the universal human rights of the Chinese people.”

Next stop on Obama’s visit after Canberra was Darwin, where the US troops are to be deployed. The city onAustralia’s northern coast that was the cradle of the Australian-US military alliance forged during World War II. A Japanese raid on Darwin in 1942 killed at least 243 people, including some American soldiers,

“We looked out at those beautiful blue waters where so many Australians and Americans rest where they fell together,” Obama said.

“The days after Darwin were tough, some thought Australia might fall, but we dusted ourselves off, we picked ourselves up, we rebuilt, and thanks to the extraordinary generation of troops, we went on to victory,” he said.

Americans and Australians have fought together in every major US war since World War I, including in Korea,Vietnam, Iraq and Afghanistan.

Obama’s comments on funding represent a crucial moment in US policy towards a region beset by territorial disputes, containing trade routes vital to US prosperity, and which is transfixed by the rise of China.

He gave his commitment on the latest leg of a Pacific tour which is meant to underscore that the US will remain a crucial player in Asia-Pacific security.

“We will preserve our unique ability to project power and deter threats to peace,” Obama said.

“And we will constantly strengthen our capabilities to meet the needs of the 21st century. Our enduring interests in the region demand our enduring presence in this region.”

For his part, Obama believes that the Pacific Rim, worth trillions in dollars in trade to the US, is vital to America’s economic future, and will produce jobs and prosperity for decades to come.

In his speech, Obama surveyed US policy towards Asia, which has evolved in three years and three trips to the region that he has taken as president.

“Here, we see the future,” he said, pledging his administration would “play a larger and long-term role in shaping this region and its future”.

“As the world’s fastest-growing region – and home to more than half the global economy -Asia is critical to achieving my highest priority: creating jobs and opportunity for the American people.”

Before his address to parliament, Obama laid a wreath at the Australian War Memorial and he later departed for Darwin, where the new  deployment will be based.

In the tropical northern outpost, he will visit the memorial of the USS Peary, which honours the 89 men killed when the warship was bombed by the Japanese during World War II raids on the port.