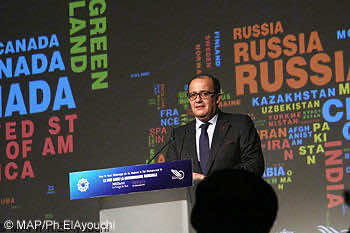 Morocco warned against the growing activities of Al Qaeda in the Islamic Maghreb (AQIM) in Africa, especially in the belt from the Atlantic to the Red Sea, said Wednesday in Tangier Moroccan Foreign Minister Taib Fassi Fihri.

The minister, speaking at the opening of the 4th Medays Forum, said that Morocco is concerned to see Africa become increasingly marked by a belt of lawlessness from the Atlantic to the Red Sea where criminal gangs in close coordination with terrorist organizations control large areas from Mauritania to Somalia.

“Today, there is evidence that Al Qaeda in the Islamic Maghreb is growing geographically and feeds on drug trafficking, which comes from South America,” said Fassi Fihri.

The Minister stressed the need to find a comprehensive and organized response to this global phenomenon, adding that Morocco hopes that all African countries at the Tangiers forum mobilize against this plight, in close relation with the international community and within the United Nations framework.