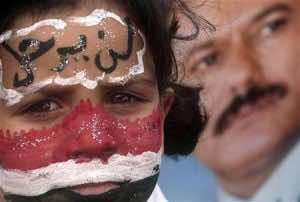 Qatar pressed Yemeni President Ali Abdullah Saleh on Thursday to sign a power transfer deal “without delay” after prolonged protests against his rule, and a U.N. envoy on a mission to resolve the crisis met opposition leaders in Sanaa.

Saleh has repeatedly backed out of signing the accord first proposed by the six-member Gulf Cooperation Council in April to help defuse an uprising that has brought the impoverished Arab country to the verge of civil war.

Ten months of unrest has weakened central government control in Yemen and allowed Islamist militants linked to al Qaeda to seize control of swathes of territory.

Qatar, a Gulf Arab state with huge gas reserves and home to the influential Al Jazeera satellite channel, has played a key role in diplomatic efforts to end the crisis in Syria. It also participated in a NATO-led mission to protect civilians in Libya that helped topple strongman Muammar Gaddafi in August.

Saleh has recently chided Qatar, without mentioning it by name, as a small country of little importance.

U.N. envoy Jamal Benomar met opposition leader Mohammed Salem Basandwa in Sanaa in an effort to end the 10-month crisis. Officials said Benomar was expected to meet representatives of Saleh later in the day to try to bridge the gap between the two sides.

Ahmed Obaid bin Dagher, a senior leader of Saleh’s ruling People’s Congress party, was quoted as saying that Yemen was close to a resolution of the crisis.

The 26 September newspaper of the Yemeni armed forces quoted bin Dagher as saying he was convinced that “we are reaching an end to the crisis, and there is no way out except through an agreement between the concerned parties.”

Saleh has said he is ready to sign the accord once an agreement is reached on what he called an operational mechanism for implementing the Arab deal. It calls for the president to hand over powers to his deputy Abd-Rabbu Mansour Hadi, who will set up a unity government and prepare for early elections.

But Saleh has also said he wants to stay on as president until an election for a new head of state is held, a demand rejected by the opposition.

Sheikh Sadeq al-Ahmar, a prominent anti-Saleh tribal leader whose followers have fought pitched battles with Yemeni government forces, said he opposed giving Saleh or any of his aides immunity from prosecution under the Gulf peace initiative.

“We want a solution for Yemen, not for Saleh,” his website quoted him as saying during a meeting with the U.S. ambassador in Sanaa on Wednesday.

A local newspaper reported on Thursday that three armed men, including one Syrian and one Egyptian, were killed in a clash with Yemeni troops in Abyan province on Wednesday.