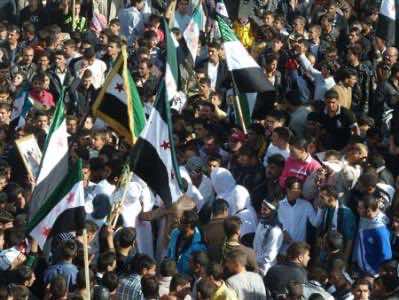 Russia stood by President Bashar al-Assad on Thursday as Arab and Western countries sought to pile pressure on the Syrian leader to halt a violent crackdown on his opponents.

The Arab League has suspended Syria and given it until the end of the week to comply with an Arab peace plan to end bloodshed that has cost more than 3,500 lives, by a U.N. count.

Russian Foreign Minister Sergei Lavrov, whose country is one of Syria’s few remaining foreign friends, said demands for Assad’s removal would destroy the initiative, which calls for dialogue between the Syrian government and its foes.

“If some opposition representatives, with support from some foreign countries, declare that dialogue can begin only after President Assad goes, then the Arab League initiative becomes worthless and meaningless,” Lavrov said.

He was speaking after talks with European Union foreign policy chief Catherine Ashton, who said the world must bring all the influence it can bear on Syria to change course.

“The future of Syria now depends on the ability of all of us to keep pressure on them to see that there is a need to stop this violence, to listen to the people, and to find a way to move forward,” Ashton told a joint news conference in Moscow.

Lavrov said earlier a raid on Wednesday by the Free Syrian Army on an Airforce Intelligence complex on the outskirts of Damascus was “already completely similar to real civil war.”

Opposition sources said Syrian army defectors had killed or wounded 20 security police in the early-morning attack, the first of its kind in an eight-month revolt against Assad.

It was not possible to verify the casualty toll. The authorities have not mentioned the attack. Syria has barred most foreign media since unrest began in March.