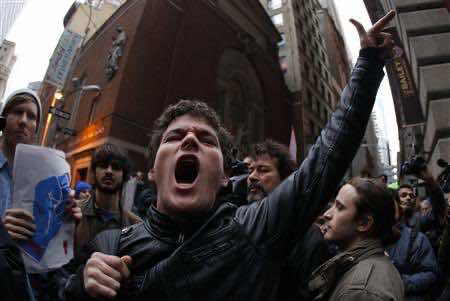 Hundreds of Occupy Wall Street protesters marched through New York’s financial district toward the stock exchange on Thursday to protest economic inequality at the heart of American capitalism.

Scores of police barricaded the narrow streets around the stock exchange and used batons to push the protesters onto the sidewalk as they marched from a nearby park in a bid to prevent financial workers from getting to their desks.

“I feel like this is a beautiful moment to take back our streets,” said Rachel Falcone, 27, from Brooklyn. “We need to prove we can exist anywhere. It’s gone beyond a single neighborhood, it’s really an idea.”

Chanting “We are the 99 percent” — a reference to their contention that the U.S. political system benefits only the richest 1 percent — the protesters broke off into groups and tried to enter Wall Street from various points.

By 10 a.m. (1500 GMT), Police spokesman Paul Browne said, about 50 people had been arrested at various locations in the financial district, mainly for disorderly conduct and resisting arrest.

At one point, some protesters chanted to police: “You’re sexy, you’re blue, now take off that riot suit.”

Taxi driver Mike Tupea, a Romanian immigrant, said his car had been stuck amid the protesters for 40 minutes.

“I have to make a living. I pay $100 for 12 hours for this cab. I am losing money every minute,'” he said. “I have all my sympathies for this movement but let me do my living, let working people make a living.”

Most rallies by the 2-month-old movement in New York have been attended by hundreds of people, but a spokesman for the protesters and city officials said on Wednesday that they expected tens of thousands to turn out for the day of action.

Protesters were planning to take their protest to 16 subway hubs later on Thursday, then return to City Hall for a rally before marching across the Brooklyn Bridge. Last month, more than 700 people were arrested during a similar march across the bridge after some protesters blocked traffic.

The demonstration comes two days after police evicted hundreds of protesters from their camp at Zuccotti Park in lower Manhattan, where the Occupy Wall Street movement was born on September 17 and sparked solidarity rallies and occupations of public spaces across the United States.

Peter Cohen, 47, an anthropologist from New York, wore a suit for the protest in a bid to improve the movement’s image.

Protesters say they are upset that billions of dollars in bailouts given to banks during the recession allowed a return to huge profits while average Americans have had no relief from high unemployment and a struggling economy.

They also say the richest 1 percent of Americans do not pay their fair share of taxes.

“I’m hoping they can succeed in shutting down the stock exchange for the day,” said Paul Layton, a trial lawyer, as he tried to get to his financial district office. “And that through their efforts they can convince government to regulate the financial industry.”

The New York Stock Exchange opened on time and was operating normally.

Derek Tabacco was not happy as he tried to get to the offices of his financial technology company and was carrying a sign with a message for the protesters that read “Get a job.”

The clearing of the Occupy camp in New York followed evictions in Atlanta, Portland and Salt Lake City. Unlike action in Oakland, California, where police used tear gas and stun grenades, most protesters left voluntarily.

Megyn Norbut, from Brooklyn, said she holds down three jobs and that she joined the protest on Thursday “because we got kicked out of Zuccotti and we need to show that this is a mental and spiritual movement, not a physical movement.”