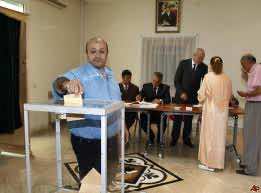 It is a real wonder to see how giving up one’s right has become a form of protest and a way of fighting corruption. Not only does this make no sense, but it also turns into a ridiculous paradox. No one knows how boycotting the upcoming elections of 25th of November would serve the cause of bringing down corruption? This is the latest step that the 20 February Movement has decided to take in its fight against corruption and struggle for democratic reforms. This sounds bizarre and strange in a country that has been suffering from the lack of youth involvement in political life, and raises the question of how such a tactic intends to establish democracy and combat corruption.

This is not the first time the movement has called for boycotting the elections. It did during the July referendum of the new constitution. Many people find such a decision to be naïve and politically immature, since its effect is not likely to serve anybody’s interests, neither those of the movement nor the people. Contrary to their expectations, the constitution was approved, although questions about the large percentage of participation in the polls remain unresolved.

Boycotting the upcoming legislative elections is seen by many as a sign of defeat and lack of confidence in the movement’s ability to attain its objectives. It is a sign, too, that it is losing momentum. The problem of the youth’s absence in political life has always been a controversial issue.

When it has come to elections, be they legislative or communal, participation is always low and most of the time alarmingly insignificant. Moreover, corruption is always there but I wonder how many people out there are ready and able to admit that the problem is not only with those who buy people’s votes; the problem is also in those who are ready to bargain with the future of their children and grandchildren for a handful of coins. If elections have become an occasion for corruption to thrive, then it is us who have made them so, but in our minds we believe that those who are willing to sell their votes are victims and the real criminals are those who offer the price. This is so ridiculous.

The call for boycotting the elections is a mistake on the part of the movement and it proves nothing more than its hard-headedness and sows doubts about its real agenda. As real Moroccans who aspire for change to make our country better, we are all under the moral and ethical obligation of encouraging each other to vote.

If we really care and want reform, then it must be our responsibility to bring it about. If we say that we have the right to live a better life and we are in a real fight against corruption, then we must impose our votes to corner corruption and bring it down. Opting for boycotting the elections can only mean that the protesters are unwilling to play their role and if they dream that one day they would make a difference without taking an active part, they are completely mistaken and unworthy of taking any credit.

The latest call for demonstrations has summoned protesters to take to the streets for what the movement is calling ‘National Day,’ scheduled just five days before the elections. One might wonder why they are calling that day ‘national’? I cannot see anything national about it. So far, the movement has not suggested any alternatives, while all it has been doing is jamming the channels of communication, trying to impose its own agenda. Of course, they keep declaring that their reaction is fueled by the undemocratic constitution that has been imposed on the people, but they have never explained how boycotting the elections can solve these problems.

We as Moroccan citizens should not forget that the initial demands of the movement aimed at stripping the king of his powers by turning the monarchy into a system where the king reigns but does not rule, and confine religion within mosques with no presence whatsoever in social life, which should be regulated by civil law.

From another perspective, the movement’s unclear stances and political immaturity has inspired a group of political parties to build on these original demands. These parties hope to fool the people into believing that a new era is about to start by the creation of what they call the Coalition for Democracy. However, the coalition has ironically stripped its member parties naked in front of everybody and proven their insincerity by their failure and inability to propose real plans and fulfill their promises.

The Coalition is made up of eight political parties. It claims to be ready to expand and include any other parties wishing to serve democracy and development. The Coalition’s manifesto sets three main aims that are practical and achievable. The first aim is to regain the people’s confidence and trust in political institutions; second, they aim at achieving better living conditions for the people and fight social marginalization; third, they promise to create some 200,000 jobs per year.

In order for the coalition to achieve these aims, the coalition will seek to enhance investment, support small and medium-sized businesses, attract foreign investment and diversify the economy, according to Mohand Laenser Secretary-General of the Popular Movement Party. I do not know why these aims sound like a broken record to a lot of Moroccans, except that this is exactly what the king has been doing for the last twelve years.

Coming back to the issue of boycotting the elections and its relation to this, I think the movement of 20 February should encourage the people to vote and bring down these parties for not taking the people seriously. It does not take a genius to realize that they are just bluffing and making use of a critical situation to attain their political goals. We Moroccans have a problem with these kind of people who never seem to keep their promises.

This is the kind of corruption we need to fight and there is no way of doing that unless we raise our voices against them. Boycotting the elections means losing ground to such people. It will make it easy for them to fool us once again, and, once again, a parliamentary monarchy and civil state have nothing to do with this.

The question of whether people should vote or not is not a Shakespearean dilemma. It is clear that stepping back is not a way of making progress. Therefore, let us assume our responsibility as citizens and take corruption down instead of whining and complaining all the time about being victims of others.