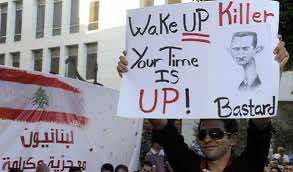 It is no longer civil disobedience and peaceful protests that the regime of Syrian President Bashar Al Assad is now facing, but a true organized guerrilla insurgency.

Since about ten days ago, deadly skirmishes have multiplied between government soldiers and deserters. According to Turkish military officials in Ankara, we cannot talk about deserter soldiers, but more organized and increasingly well-armed rebels.

Also, according to the same sources, the army of Bashar Al Assad is facing targeted actions on the borders of Turkey, Lebanon and Jordan. Operations against the forces of order and Chabihas Moukhabarats also took place on the outskirts of Damascus and in some parts of the capital.

On the other hand, reports of Western services have pointed at financial difficulties now befalling the Baathist regime. The government of Bashar al-Assad is experiencing difficulties in paying civil servants and soldiers on time.

In addition, many senior Syrian military officials have started to show their disgruntlement. They say they cannot keep their troops in a state of war for several months in a row without permission or rotations. It’s been nine months that the Syrian army and security forces are on a war footing without a truce.

This state of affairs has resulted in fatigue and tiredness among the troops. “Things cannot continue like that, even with the help of the Iranian Revolutionary Guards Brigade and Hezbollah fighters,” said a Lebanese MP.

It seems that the end of the Bashar al-Assad regime is coming soon. “We will have many surprises in the coming months. Many things are changing within the system,” says the same member, once close to the Baath Party.