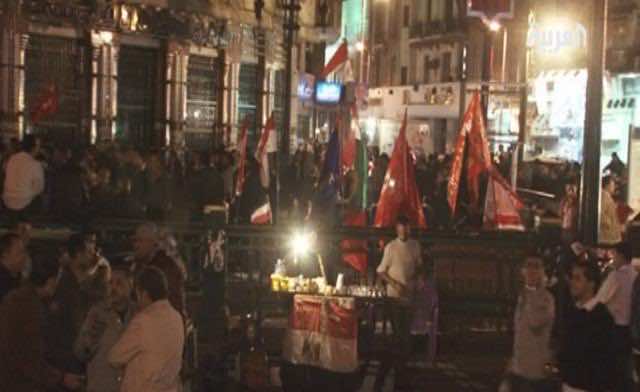 Thousands of Egyptians were massing in Cairo’s Tahrir Square early on Friday for a mass rally against the military rulers’ proposed “supra-constitutional principles” that seek to shield the army from public scrutiny.

Liberal and Islamist group, including the powerful Muslim Brotherhood movement, announced they would hold the rally after the government went ahead with its plan to draft overarching constitutional principles.

Tents were pitched and sound stages set up as protesters returned to Tahrir square, the epicenter of an uprising that ousted President Hosni Mubarak from office in February, in what they said was an attempt to put “the revolution back on track.”

“There will be a big revolution tomorrow,” said a protester demanding rights for Egyptians killed and wounded in the revolution.

The government’s draft drew fire from most quarters for including clauses that removed the ruling military’s budget from parliamentary oversight and allowed the military final say on military-related laws.

The government revised the draft, but the Islamists, who organized a mass protest in July against such a charter, have rejected the very idea of a document that would limit parliament’s authority to draft the constitution.

“The protest on Friday is to reclaim power from the army and oppose Silmi’s document,” said Mohamed Fathi from the youth group the Front to Protect the Revolution.

Salafi parties and movements, who follow orthodox Islamic teachings, were the earliest to galvanize support for the Friday protest, with the Muslim Brotherhood and a number of liberal parties following suit.

“Our demands are the revolution’s demands … our sit-in is open until we leave,” said protester Abdulla Ibrahim.

Any extended protest by demonstrators camping in Tahrir square could potentially destabilize preparations for a parliamentary vote due on Nov. 28.

Political groups have demanded the military council announce a clear timetable for handing power over to an elected civilian government with a deadline for presidential elections no later than April 2012.