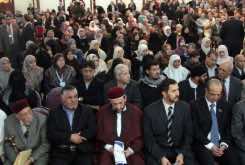 Libya’s Muslim Brotherhood, repressed under the regime of fallen strongman Moamer Kadhafi, has opened its first public congress inside the country for almost 25 years.

“This is an historic day for us and for the Libyan people,” its leader Suleiman Abdel Kader told AFP at the opening late Thursday of the three-day congress in the eastern city ofBenghazi.

Brotherhood officials said it was their first public meeting insideLibyain almost quarter of a century, although it met underground during Kadhafi’s rule for fear of reprisals or held their congress abroad.

The congress was due to elect a leader and discuss strategy, notably whether to form a political party, said Abdel Kader.

The Brotherhood supports the idea of a “civil” state but founded on Islamic values, he said. “This country belongs to all its people and everybody must participate in its construction.”