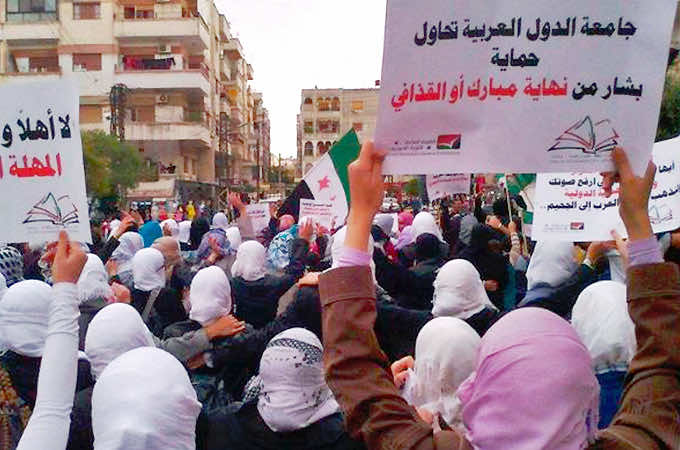 Syrian troops have shelled two northern villages overnight after an attack by army defectors on forces loyal to President Bashar al-Assad, local activists say, in the first report of such an incident during the eight-month uprising.

Eight villagers were injured when tank shells and heavy mortars fell for three hours on Tal Minnij and Maarshamsheh and surrounding farmland, activists told the Reuters news agency on Friday.

“Hundreds of families have left. Electricity and internet services have been cut off,” said one activist who gave his first name as Raed.

Army defectors earlier had attacked a building housing security forces near army depots in the Wadi al-Deif area on the edge of the town ofMaaratal-Numaan, 290 km north of Damascus, the activists said.

It was not possible to confirm the shelling independently.Syria has barred most foreign media since unrest began.

Until now, Syrian troops have mostly been using heavy machineguns and anti-aircraft guns, employed as a ground weapon, on restless cities and towns to try to quell the uprising against the Assad family’s 41-year rule.

The assault came a day after the Arab League gave Syria until the end of the week to comply with an Arab peace plan to end a crackdown on the uprising that has killed more than 3,500 people by a UN count.

Along with mostly peaceful street protests demanding Assad’s removal, an armed group has emerged, prompting calls by opposition leaders for protesters to stick to non-violence in light of an escalating crackdown.

Mohammad Riad Shaqfa, leader of Syria’s outlawed Muslim Brotherhood, said this week’s attack on the security complex near Damascus was carried out by soldiers “who have refused orders to kill their own people”.

“We reaffirm the peacefulness of the uprising,” Shaqfa said. “We are calling on civilians not to take up arms.”

The town, on the Damascus-Aleppo highway, has seen regular street protests demanding Assad’s removal and raids by security forces to put down the demonstrations.

In the last few weeks, residents say a growing number of army defectors has been defending Maarat al-Numaan and attacking army patrols and roadblocks.

Activists said at least 10 civilians were killed elsewhere in the country on Thursday in raids by troops and in firings from roadblocks.

Among them was activist Samer al-Tayyeb, who was arrested in house-to-house raids in the eastern province of Deiral-Zor and died in custody, the main activists group known as the Local Co-ordination Committees said.

The authorities blame the violence on foreign-backed armed groups who they say have killed more than 1,100 soldiers and police.

Syria’s official news agency said troops carried out a “qualitative operation” in the region, arresting 58 wanted people and seizing rifles and bomb detonators. The agency said eight “of the most wanted terrorist” were arrested on Thursday in the central city ofHoms, where tanks have been deployed.

While Arab and Western countries sought to increase pressure on Assad, Russia, which has a naval base, major oil concessions and military personnel in Syria, stood by the Syrian leader.

Sergei Lavrov, the Russian foreign minister, whose country is one of Syria’s few remaining foreign allies, said demands for Assad’s removal would destroy the initiative, which calls for dialogue between the Syrian government and its foes.

Lavrov said a raid on Wednesday by the Free Syrian Army on an Airforce Intelligence complex on the outskirts of the capital Damascus was “already completely similar to real civil war”.

Opposition sources said Syrian army defectors had killed or wounded 20 security police in the early-morning attack, the first of its kind in the revolt against Assad.

Mark Toner, the US state department spokesman, rejected the suggestion that Syria was virtually in civil war, saying: “We believe it’s very much the Assad regime carrying out a campaign of violence, intimidation, and repression against innocent protesters.”