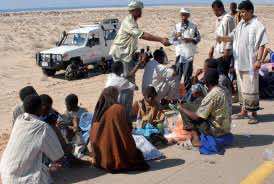 Over 12,000 refugees and migrants arrived in Yemen by boat in October, the highest monthly total since the United Nations refugee agency began tracking the flow of between the Horn of Africa and Yemen nearly six years ago.

“With the autumn sailing season still in full swing, we expect the numbers for 2011 to grow further,” Melissa Fleming, UNHCR’s spokesperson in Geneva, told reporters.

Of this year’s arrivals 23,079 are from Somalia, while nearly all the remaining 61,577 are Ethiopians.

Ms. Fleming noted that since 2009 Ethiopian migrants have constituted the largest group among those crossing the Red Sea and the Gulf of Aden. From 2006 to 2011 their number has increased six fold – from some 11,000 in 2006 to 61,000 between January and October this year.

The sailing patterns have also shifted significantly over the years, she said. Initially, most of the crossings occurred in the Gulf of Aden where the journey from Somalia to Yemen takes three to four days.

Since 2009 there has been increasing traffic on the Red Sea, where the voyage from the Horn to Yemen, with boats now arriving at all times of day, lasts only a few hours. “Today, three out of four boats reaching Yemen come ashore on the country’s Red Sea coast,” said Ms. Fleming.

Refugees from Somalia continue to cite conflict, insecurity, drought and the resulting famine as the main factors driving them to leave their country, according to UNHCR.

“Most arrive in Yemen unaware of the situation there, where insecurity makes further movement difficult and risky,” Ms. Fleming pointed out. “Most Ethiopians say they left home because of a lack of economic and livelihood opportunities, but some have indicated they fled in fear of persecution or insecurity in their regions of origin.”

As well as affecting refugees and migrants, the insecurity and fighting in many parts of Yemen also poses additional challenges and risks for UNHCR’s staff and its partners, who have been forced to reduce the number of convoys and take longer routes transporting refugees from the reception and transit centres along the Gulf coast to Kharaz refugee camp, some 130 kilometres west of Aden.

The agency is also concerned about an increasing trend of abductions, extortions, kidnappings and sexual assaults targeting refugees, and particularly Ethiopian migrants.

“While Somalis are automatically recognized as refugees upon arrival to Yemen and are generally left alone by smugglers, many Ethiopians are taken by smugglers to other Gulf states or held for ransom before they can have any contact with the authorities or UNHCR,” said Ms. Fleming.

Yemen is host to more than 200,491 Somali refugees. There is also an estimated 445,679 Yemeni civilians displaced throughout the country.