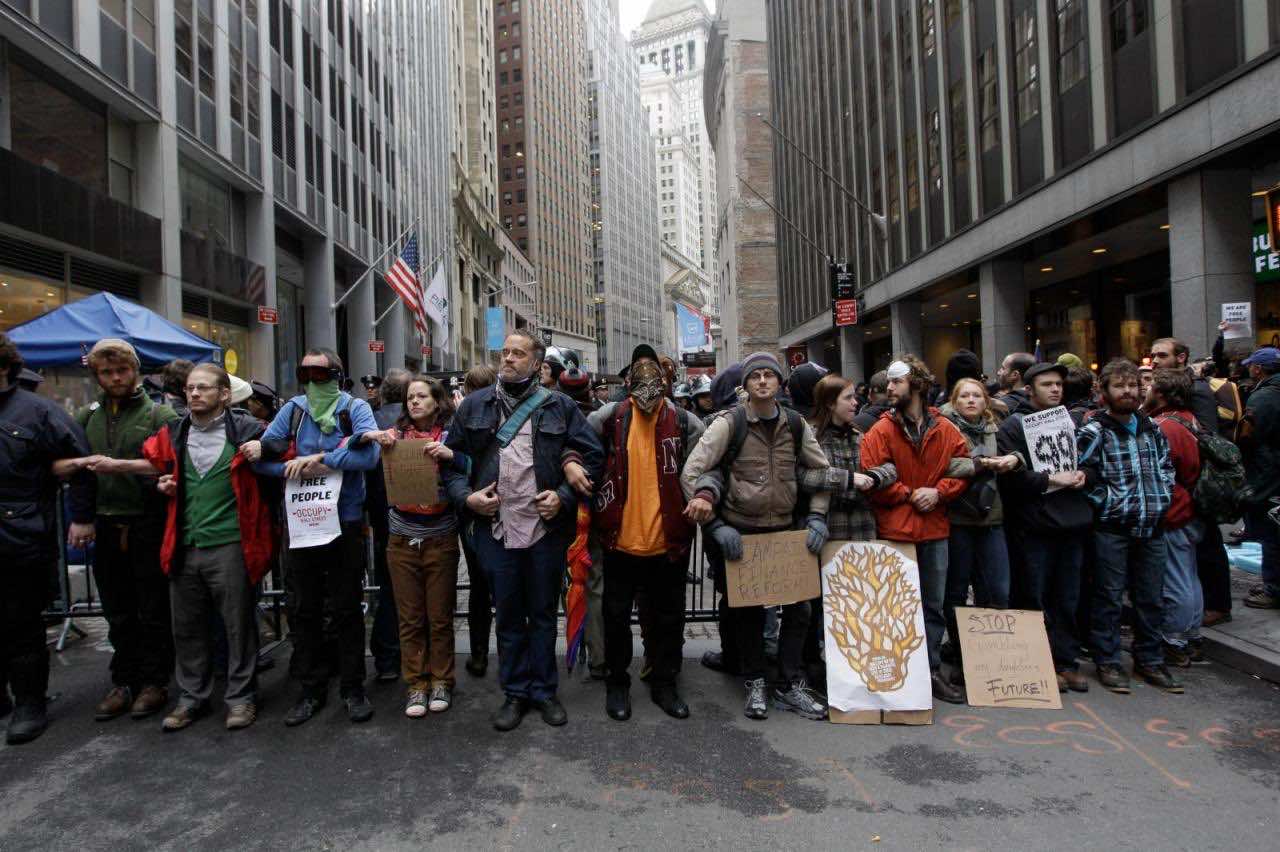 Occupy Wall Street protesters clogged streets and tied up traffic around the U.S. on Thursday to mark two months since the movement’s birth and signal they aren’t ready to quit, despite the breakup of many of their encampments by police. More than 200 people were arrested, most of them in New York.

The demonstrations – which took place in such cities as Los Angeles, Las Vegas, St. Louis, Washington and Portland, Oregon – were for the most part peaceful. Most of the arrests were for blocking streets, and the traffic disruptions were brief.

Chanting “All day, all week, shut down Wall Street,” more than 1,000 protesters gathered near the New York Stock Exchange and sat down in several intersections. Helmeted police broke up some of the gatherings, and operations at the stock market were not disrupted.

As darkness fell, a crowd of several thousand people, their ranks swelled by union members, jammed Manhattan’s Foley Square, where their chants boomed off the surrounding courthouses and other government buildings. From there, they began a march over the Brooklyn Bridge.

The protests came two days after police raided and demolished the encampment at New York’s Zuccotti Park that had served as headquarters of the Occupy movement.

“This is a critical moment for the movement given what happened the other night,” said demonstrator Paul Knick, a software engineer from Montclair, New Jersey. “It seems like there’s a concerted effort to stop the movement, and I’m here to make sure that doesn’t happen.”

At least 177 people were arrested in New York. Some were bloodied during the arrests. One man was taken into custody for throwing liquid, possibly vinegar, into the faces of several police officers, authorities said. Many demonstrators were carrying vinegar as an antidote for pepper spray.

A police officer needed 20 stitches on his hand after he was hit with a piece of thrown glass, police said.

In Los Angeles, about 500 sympathizers marched downtown between the Bank of America tower and Wells Fargo Plaza, chanting, “Banks got bailed out, we got sold out!” More than two dozen people were arrested.

Police arrested 21 demonstrators in Las Vegas, and 20 were led away in plastic handcuffs in Portland, Oregon, for sitting down on a bridge. At least a dozen were arrested in St. Louis after they sat down cross-legged and locked arms in an attempt to block a bridge over the Mississippi River.

Several of the demonstrations coincided with an event planned months earlier by a coalition of unions and liberal groups, including Moveon.org and the Service Employees International Union, in which out-of-work people walked over bridges in several cities to protest high unemployment.

The street demonstrations also marked two months since the Occupy movement sprang to life in New York on Sept. 17. They were planned well before police raided a number of encampments over the past few days, but were seen by some activists as a way to demonstrate their resolve in the wake of the crackdown.

Thursday’s demonstrations around Wall Street brought taxis and delivery trucks to a halt, but police were largely effective at keeping the protests confined to just a few blocks. Officers allowed Wall Street workers through the barricades, but only after checking their IDs.

Mayor Michael Bloomberg said police had been expecting as many as 10,000 protesters based on what activists had been saying online. But he said there had been “minimal disruption.”

“Most protesters have, in all fairness, acted responsibly,” he said after visiting an injured police officer in the hospital.

Police Commissioner Raymond Kelly said officers confiscated metal devices that some demonstrators had apparently planned to use to lock themselves into the entrances to Wall Street businesses.

The demonstration that drew thousands to Foley Square in the evening was a rarity in the Occupy movement: Union organizers obtained a permit from the city, and speakers were allowed to use a sound system.

Among the demonstrators arrested in New York was a retired Philadelphia police captain, Ray Lewis, who was taken into custody in his dress uniform. Others included actor and director Andre Gregory, who said he hoped the movement would lead to national action on economic injustice.

“It’s a possible beginning of something positive,” he said.

Some onlookers applauded the demonstrators from open windows. Others yelled, “Get a job!”

“I don’t understand their logic,” said Adam Lieberman, as he struggled to navigate police barricades on his way to work at JPMorgan Chase. “When you go into business, you go into business to make as much money as you can. And that’s what banks do. They’re trying to make a profit.”

Gene Williams, a bond trader, joked that he was “one of the bad guys” but said he empathized with the demonstrators: “The fact of the matter is, there is a schism between the rich and the poor, and it’s getting wider.”

The confrontations followed early-morning arrests in other cities. In Dallas, police evicted dozens of protesters near City Hall, citing health and safety reasons. Eighteen protesters were arrested. Two demonstrators were arrested and about 20 tents removed at the University of California, Berkeley.

City officials and demonstrators were trying to decide their next step in Philadelphia, where about 100 protesters were under orders to clear out to make way for a long-planned $50 million plaza renovation at City Hall. Union leaders pressed the demonstrators to leave, saying construction jobs were stake.