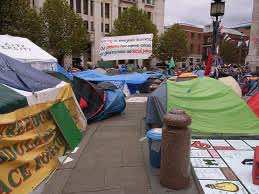 The Occupy London Stock Exchange (LSX) movement said a dozen demonstrators gained access to the building in the Hackney area of east London overnight and secured it, adding that they planned to use it as a “bank of ideas.”

The London protesters, inspired by the Occupy Wall Street demonstrators in New York, also have camps outside St Paul’s Cathedral in the heart of the financial district and in Finsbury Square, also near major banks.

“As banks repossess families’ homes, empty bank property needs to be repossessed by the public,” Occupy LSX member Jack Holburn said in a statement on the movement’s website.

“We hope this is the first in a wave of ?public repossessions? of property belonging to the companies that crashed the global economy.”

UBS said it was taking action amid reports that security guards had turned up outside the building. “We are aware of the situation and are taking appropriate action,” the bank said in a statement.

London’s Metropolitan Police confirmed that it had been called to the site during the night. “Police attended the address but no offences were disclosed. We are monitoring the situation,” a spokesman told AFP.

Under English squatting laws, if an empty building can be entered without causing any damage then it can be occupied and the owners must take legal action to evict them.

The protesters are following the example of the “Indignados” movement in Spain which has taken over a derelict hotel in Madrid to house homeless people or those whose homes had been repossessed.

On Thursday night the protesters camped outside historic St Paul’s refused to leave despite the expiry of a deadline issued by the Corporation of London, the local authority for the financial district.

The authority has said it will now take court action to evict the protesters, who have been camped outside the church for more than one month.

The new occupation came as protesters in New York clashed with police in the movement’s epicentre on Wall Street, with 250 arrests.