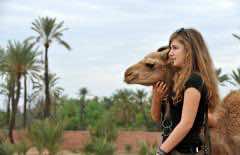 The vast palm groves of Marrakesh in southern Morocco are in danger from urbanisation, massive tourist projects and even golf courses, so a conservation programme is in hand to save them.

Ten centuries after they came to be, these palm groves, which are among the most prized sites in the north African kingdom, are subject to the combined ravages of mankind and of the climate.

The oasis with its hundreds of thousands of palms used to stretch over 16,000 hectares (39,500 acres), but it has lost 30 percent of its surface area in the past 20 years, according to experts.

The experts point to the nestling in the heart of the groves of big tourist attractions at the expense of the environment. These sites swallow up lots of water, upset the ecological balance and lead to the degradation of the palms.

“The tourist projects, for all the good sides of what they generate, take enormous resources. This has a negative effect on the ecological balance,” Nour-Eddine Laftouhi, a hydrogeologist at the Marrakesh faculty of sciences, told AFP.

“Personally, I consider the irrational spread of golf courses to be a crime,” he added.

Nicknamed “the ochre city” for the predominant colour of its stonework, Marrakesh is the most popular place in Morocco with tourists and indeed among Moroccans taking a break.

Fortunately for the nature-lover and hiker, the snowcapped mountains that surround the town and which can be seen from the city centre, make for good picture postcards and walks.

But Marrakesh today has 10 golf courses, two of them in the palm groves, and construction companies are waiting for authorisation to create about 10 more, which would use a great deal of water.

The tourist appeal of Marrakesh has led the Club Med to push into the palm grove with its golf course and a centre hosting three swimming pools.

Such activities are a stark contrast with the very name of the city, which was founded in 1062 by the first ruler of the Almoravid dynasty, Yusef Ibn Tashfin, and named for divine delights rather than worldly pleasures.

“Marrakesh” comes from the Berber word “amour” which means “country” and from “Akouch”, which means “God”, thus making the city the “land of God” or “the holy land”.

Such concepts evaporate at a time when the city has almost one million inhabitants, with an impressive number of hotels, a multitude of swimming pools and numerous “riyadhs”, the traditional homes built around an interior courtyard.

Some of the riyadhs have been bought up and renovated by wealthy Moroccans or rich foreigners, driving the less well-off residents towards the outskirts of the city.

This sorry state of affairs arouses feelings of bitterness and nostalgia among inhabitants of the palm groves, who are becoming fewer and fewer.

“The spring welled up right here, where I am standing. Before, there was a stream,” said Boujemaa, a resident of a grove. “There used to be a spring over there and another beside it. Everywhere, this place was full of springs. But once they began to build the villas and hotels, the water disappeared. It’s over.”

To protect the palm groves, the local authorities launched a large-scale programme in 2007, with the goal of planting 430,000 palm trees by one year from now.

“Thanks to the water treatment plant, opened in 2010, and to the wells that are already operational, large quantities of water will become available,” said Abdelilah Mdidech, the director of the programme to safeguard the oasis, steered by the Mohammed VI Foundation for the Environment.

Hundreds of workers plant new trees each day and take care of those that are getting old.

“We have already planted 415,292 young palms (…) and these young plants are doing well, with green leaves and fine crowns,” Mdidech said.

He added that he wanted to be “realistic but optimistic”.

“I know that we lack the means, particularly in water supply, to recreate a verdant oasis. That’s realistic. But thanks to this project, it can be saved. I am an optimist.”